Day 3: Thierry and Nicolas make it five in a row! 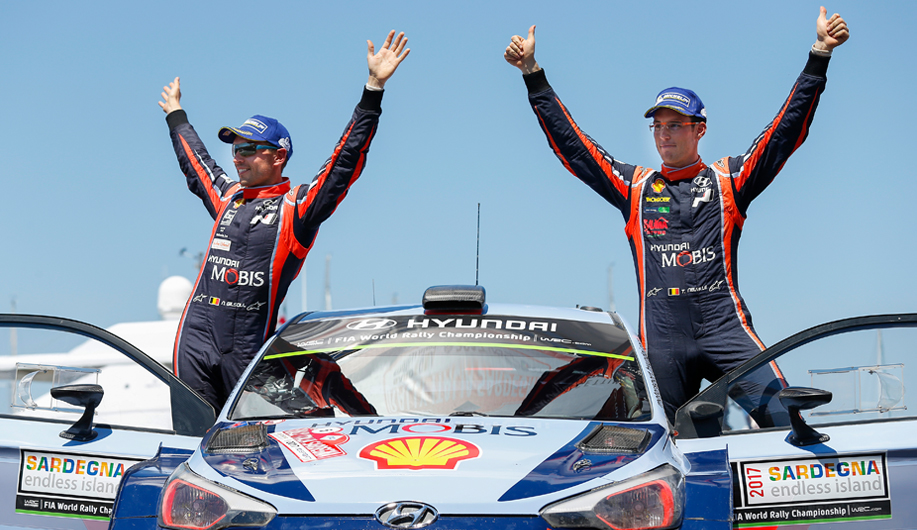 Day 3: Thierry and Nicolas make it five in a row!

On a tense final day of Rally Italia Sardegna, Thierry and Nicolas have added another podium result to our 2017 total.

Finishing in third, and picking up two additional Power Stage points, our Belgians have reduced the gap to Championship leader Sébastien Ogier to 18 points.

“To score a podium in this tough rally is a good result and extends our run,” said Thierry. “At the same time, we are disappointed at not being able to compete for the victory.”

Far away, so close

With six rounds of the season left to contest, there are plenty of opportunities to pick up points. “We have closed the gap to Ogier ever so slightly. We know it will need a big push into the second half of the season to catch him,” admitted Thierry.

Sunday’s four stages only covered 42km but offered plenty of drama. Hayden and Seb started the day with their second stage win of the weekend, but crashed out in SS18, the second run through Cala Flumini.

“We had another very strange incident on a ‘nothing’ corner,” said a dejected Hayden. “I don’t know why this is happening. I am incredibly disappointed in myself and for the team.”

Four is the magic number

Dani and Marc were also playing catch-up after a frustrating Friday left them cleaning the stages as first on the road.

Our Spaniards got straight down to business on Sunday, registering their fourth stage win in SS17 (Sassari-Argentiera). Conserving their tyres, they had their sights set on a strong Power Stage performance  and they didn’t disappoint!

“A much better way for us to end the rally,” said Dani. “I was happy to take the stage win on Sunday morning and had a good push in the Power Stage. It was not easy but we take some points away from this event.”

Four is the most stage wins our Spanish crew have taken in a single event while representing our team. Scoring four extra points in the final test doubles their Power Stage total for this season.

Despite our podium, we have seen an increase in the gap to M-Sport in the Manufacturers’ Championship.

Our Team Principal Michel offered an honest assessment of the rally: “The reality is that we have lost ground to M-Sport,” he said. “Our congratulations to them and to Ott Tanak on his debut WRC win. We missed the chance to assert our authority on this event. All crews showed potential but it was not to be.”

Next on the calendar is Rally Poland, where we have scored podiums twice previously.

“The team has worked hard so we will gladly take the consolatory podium, all things considered,” concluded Michel. “We will regroup for Poland.”

2017 FIA World Rally Championship for Drivers’ Standings
After round 7

2017 FIA World Rally Championship for Manufacturers’ Standings
After round 7