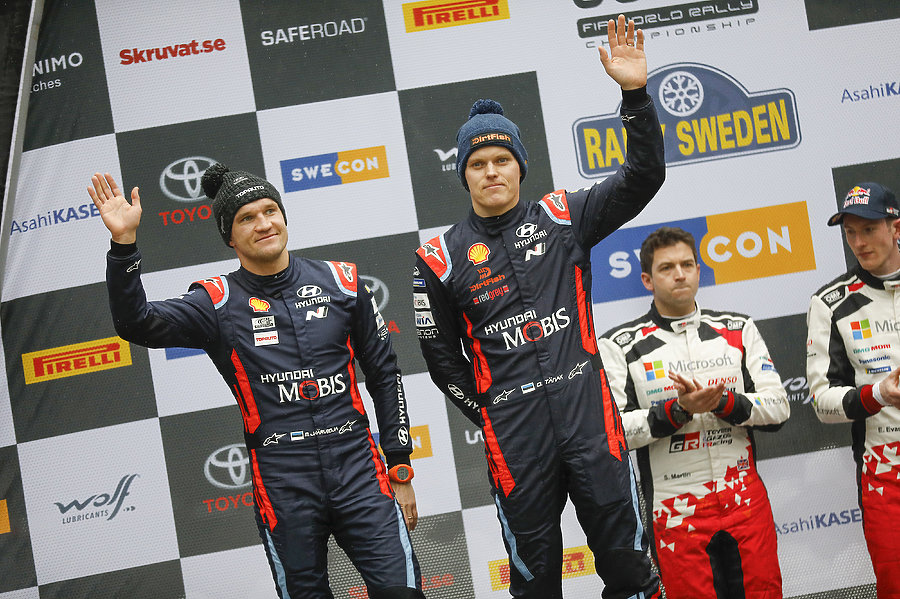 A challenging weekend in Rally Sweden, the second round of the 2020 WRC season, resulted in a podium finish for our team, as Ott and Martin secured a strong second place.

It was a milestone moment for our Estonians, representing their first trophy as a Hyundai Motorsport crew, a fantastic comeback after the disappointment of Rallye Monte-Carlo.

“I am pleased to take my first podium with the team, particularly considering the challenging conditions we’ve all experienced this weekend,” said Ott. “After Monte-Carlo, it was important for us to complete the full event, to get some kilometres in the car, and to get some points on the board.”

Organisers had been forced to shorten the rally itinerary to just nine stages after unseasonal weather conditions left roads lacking the usual snow and ice that characterise Rally Sweden. At times, the event turned into full gravel with the final morning’s solitary run, the Likenäs Power Stage, muddy and wet.

It was a strong finish for our Belgians Thierry and Nicolas who claimed four extra points with a competitive performance. Unfortunately, an early road position on the first day of the rally left the Monte-Carlo winners down in sixth place overall.

“We had only one target today, which was to try and optimise the situation and push for points in the Power Stage,” said Thierry. “It has been a tough rally, but we couldn’t have done much more. There were a few stages where we lost a few seconds here or there; I don’t think it would have changed the end result.”

Craig and Paul, in their third WRC event with our team, finished one place further back in seventh. “A difficult weekend,” summarised Craig. “I have enjoyed being back in a WRC car immensely but it’s hard not to be up there fighting for podiums and wins. The priority was to bring the car home, which we did, and to support the team as best we could.”

Thierry holds second place on the drivers’ table on equal points with leader and Rally Sweden winner Elfyn Evans. Ott, meanwhile, scored 20 points to move into sixth. In the manufacturers’ chase, we drop to second place.

Our Team Principal Andrea reflected on a tough weekend: “I can’t say we are happy. We have highlighted again that there are situations in which we are not demonstrating the level of performance required. We have never really been in the fight and always had a defensive approach. At least we are still leading the drivers’ championship on the same points total as Evans, and we didn’t lose too much in the manufacturers’ so it’s still game on.”

The third round of the season will take place in Mexico from March 12-15.

2020 FIA World Rally Championship for Manufacturers’ Standings
After round 2

2020 FIA World Rally Championship for Drivers’ Standings
After round 2