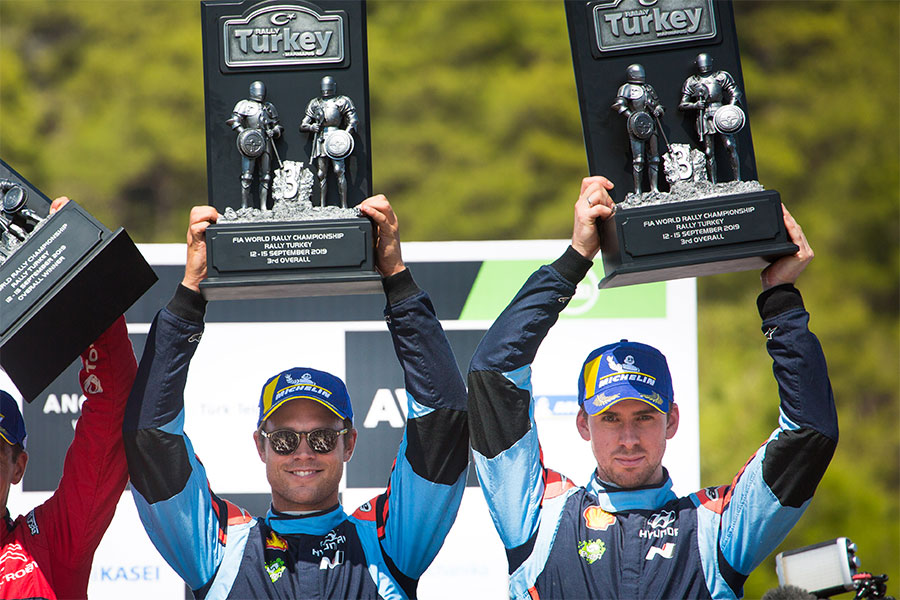 In one of the most punishing rallies on the WRC calendar, we have emerged from Rally Turkey with our tenth podium result of 2019 and a boost to our championship total.

Andreas and Anders scored their third top-three result of the year, adding to second place in Argentina and third in Sardinia. The result was just reward for the crew’s perseverance on the rough Turkish stages, and has helped us to increase our lead in the manufacturers’ standings to 19 points.

“It has been a good rally for us and I am delighted to be back on the podium,” said Andreas. “We have concentrated on staying away from drama, keeping out of trouble and maintaining a good pace, all of which we have managed well.”

There was unfortunately drama and disappointment for our two other crews, as they were hampered in their own push for the podium.

The rally got off to a poor start for Dani and Carlos as they picked up a puncture on Friday’s opening stage (Içmeler), losing over 40 seconds. They ended the day in more positive spirits with a dominant stage win (Ula 2) and fought back to fifth overall, scoring ten valuable championship points.

“Without our puncture on Friday morning, we would have been able to put up an even stronger fight,” said Dani. “The roads in Turkey can be extremely rough, so to make it to the end of the weekend in fifth place is not so bad.”

Thierry and Nicolas were left to rue a mistake on the opening stage on Saturday. Running in third overall, the crew went off in the dusty conditions of Yesilbelde, rolling the car onto its side. They lost four minutes of time, dropping them out of contention. A salvage mission on Sunday saw the crew take some consolatory Power Stage points.

“It has definitely been a disappointing and difficult weekend for us,” said Thierry. “I gave it everything I could, and there was nothing more. That’s how it is. We have three rounds of the season left, so let’s move onto the next one and see what happens.”

Despite the difficulties, we demonstrated strong pace from the i20 Coupe WRC including seven stage wins with all three crews registering fastest times, and a joint win for Thierry and Andreas on Thursday’s opening Super Special. Scoring 25 points, we head to the next round of the championship (Wales Rally GB, October 3-6) leading the close title fight.

“It is not much use to say that it has been a tough rally,” summarised our Team Director Andrea. “The fact we’ve increased our lead in the championship is the only positive thing I can take away.”

2019 FIA World Rally Championship for Manufacturers’ Standings
After round 11

2019 FIA World Rally Championship for Drivers’ Standings
After round 11