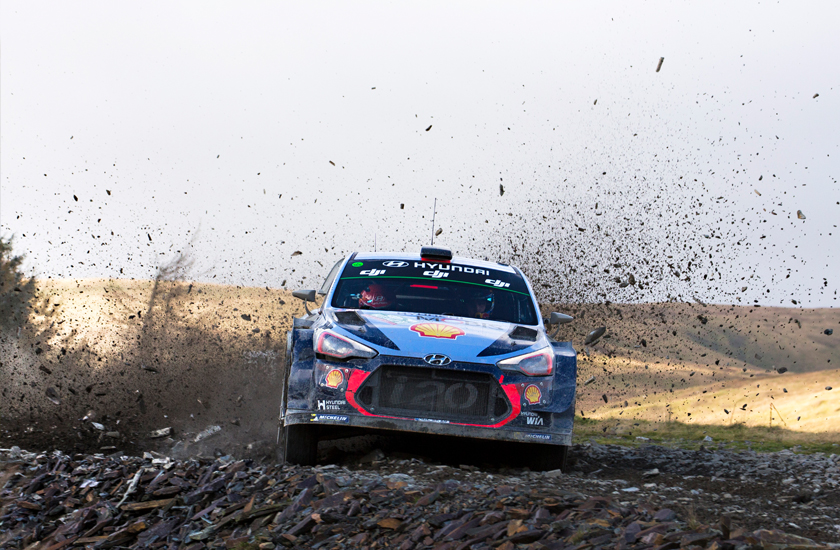 On a day of mixed feelings, we have achieved a strong podium finish in Wales Rally GB with Thierry and Nicolas completing the event in second position.

Our Belgians made a spectacular comeback after incurring a ten-second penalty on the rally’s opening stage. Registering five stage wins, including maximum points on the Power Stage, they claimed their seventh podium of the 2017 season in style.

Unfortunately, it wasn’t enough to stop Sébastien Ogier from taking his fifth WRC title, or M-Sport from claiming the Manufacturers’ title. Second place still marked our best ever result in Wales Rally GB.

“Our congratulations go to M-Sport and Sébastien for taking the titles this weekend,” said our Team Principal Michel. “They have had the strongest overall package this season. That’s the way to win the Championship.”

“It has been a really exciting battle this year,” added Thierry. “Although we have had our moments of misfortune, we have enjoyed some great fights along the way.”

With Andreas and Anders finishing fourth in their second event with our team, we were able to guarantee second place in the Manufacturers’ Championship.

Sunday’s schedule made for an entertaining final day of action with 12 seconds separating second to sixth positions at the start of the morning. The close battle kept crews fighting until the very end, and ensured a thrilling finale.

Andreas and Anders were able to move up to fourth with two stage wins on the final morning, finishing just four seconds from the podium.

“We wanted to show progress from Spain and we definitely did that,” said Andreas. “The battle for the podium was really close and I am pleased that we could finish so close to Séb. Fourth place in our second event with Hyundai Motorsport is pretty good.”

Hayden and Seb completed the rally in eighth place, two ahead of Dani and Marc, following a tough weekend for both crews.

“The result isn’t what we wanted,” commented Hayden, “but we have started to regain our confidence in the car, and just enjoy ourselves a bit more. We can now reset and refocus our efforts on Rally Australia, where we have our sights set much higher.”

For our Spanish crew, Wales Rally GB represented their final rally of the 2017 season.

“We haven’t had the confidence that we needed to mount a stronger attack this weekend,” admitted Dani. “It isn’t the result we know we are capable of. Although I am not competing in Australia, we will be hoping for a competitive event for the team as we prepare to come back stronger in 2018.”

Despite conceding the Manufacturers’ title to M-Sport, we are still able to reflect on a competitive weekend.

“We did all we could and saw much improved performance from our crews and cars,” concluded Michel. “We established ourselves as ‘best of the rest’ after an imperious Elfyn Evans, who fully deserved his home win. We will now aim for a competitive conclusion to the season in Australia.”

The final round of the 2017 WRC season, Rally Australia, will take place from 16-19 November.

2017 FIA World Rally Championship for Drivers’ Standings
After round 12

2017 FIA World Rally Championship for Manufacturers’ Standings
After round 12