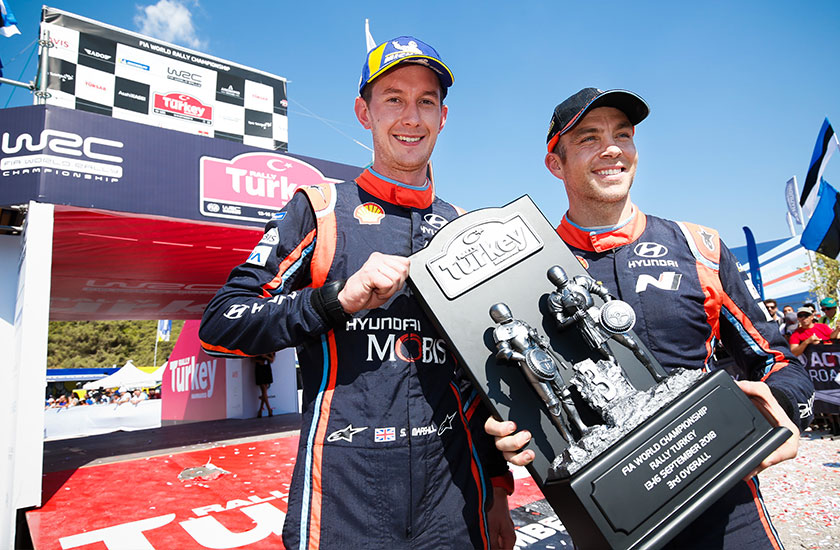 In WRC, you have to take the rough with the smooth  and Rally Turkey was definitely one of the toughest of the season for our team! Through all of the drama, Hayden and Seb came through unscathed to take their first podium finish of the season.

While all eyes were on the championship battle, our #6 crew followed an intelligent approach to secure our tenth top-three result of the season so far.

“We adopted a particular strategy that has required us to hold back and be patient,” said Hayden. “It paid off and we have been rewarded with third place. It’s been a while since we’ve been on the podium!”

Having led the rally on three separate occasions, a fifth placed finish for Andreas and Anders was little consolation.

“Fifth is not what we wanted, nor what we were capable of,” said Andreas. “It was important for us to finish the rally with a safe, clever drive. We needed to secure points for the manufacturers’ championship. We have lost a lot to Toyota this weekend.”

Thierry and Nicolas were also unlucky not to be able to take the win despite being frontrunners at the end of Friday. Still, our Belgian crew pulled out an impressive performance in the Power Stage to wrestle five driver points from a disappointing weekend.

“I was absolutely flat out and could not have done any more,” said Thierry. “We are fighting for the championship against some very hard guys. In all honesty, I feel we should have taken the win this weekend. I am disappointed but we win and lose together as a team.”

Going down to the wire

In summary, our Team Principal Michel remained pragmatic. “I am pleased to see Hayden and Seb register their first podium after a measured drive,” he said. “We know we have missed out on so much more but we have to accept the situation. We have seen a shift in the championship battle, one from which we will need to bounce back quickly.”

We have dropped to second in the manufacturers’ standings, five points behind Toyota, with three rallies remaining. Thierry has also seen his lead in the drivers’ table reduced to 13 points from new runner-up Ott Tanak. It promises to be an exciting fight to the finish. The next event of the season, Wales Rally GB, takes place from 4-7 October.

2018 FIA World Rally Championship for Drivers’ Standings
After round 10

2018 FIA World Rally Championship for Manufacturers’ Standings
After round 10