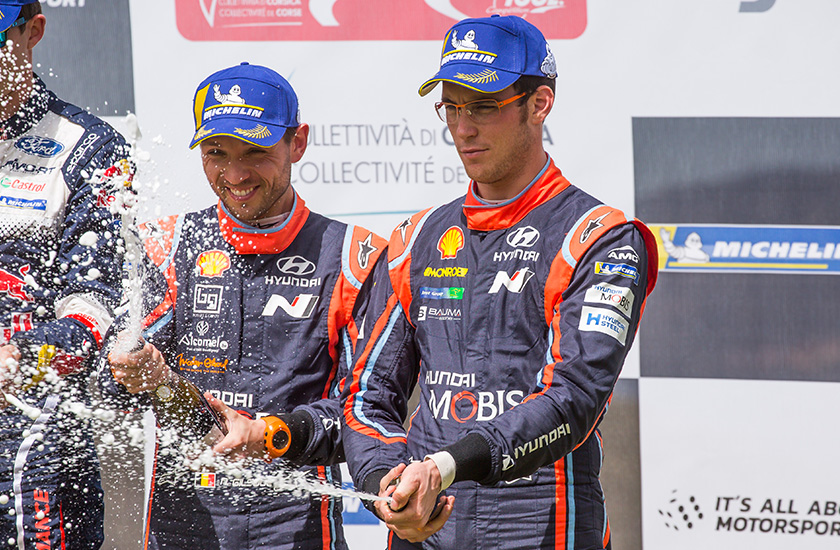 On a dramatic final day of Tour de Corse, the fourth round of the 2018 WRC season, we have secured an important podium result with Thierry and Nicolas finishing in third overall.

Sunday’s itinerary saw crews negotiate the epic 55km Vero-Sarrola-Carcopino stage, with its seemingly never-ending sequence of turns, followed by the 16.25km Power Stage around the site of a former prison at Chiavari.

Thankfully, our Belgians were able to lock in their second podium of the season, despite drama on the final stage as they were reduced to just three engine cylinders.

“There has been a bit of frustration over the weekend,” admitted Thierry. “We haven’t been able to match the times of the front-runners, even if we tried really hard. In general, I am pleased with the final result but in terms of outright performance we were just not on the pace.”

Dani and Carlos moved up to fourth place on the final day to add more points to our season total. The result helped us to retain the lead of the manufacturers’ championship by four points over M-Sport Ford.

It was this positive that our Team Principal Michel focused on in his post-rally assessment. “The championship is still incredibly close,” he said. “We can’t afford to have difficult weekends like this too often, so we will regroup and work hard to improve our performance on tarmac.”

Our Spaniards were also refusing to get downbeat. “Our end result was not too bad considering the weekend we have had,” said Dani. “We have pushed as hard as we can but the times have not been there. Championship points are something positive to take away.”

For Andreas and Anders, the rally ended with a disappointing seventh place.

“Absolutely not the result we wanted,” said Andreas. “We have some time before the next tarmac event in Germany, so we have to put in lots of effort to make the improvements we need. That’s the homework we are taking from the weekend”

The WRC season moves onto Argentina later in April for the first of a series of gravel events. The scene of our memorable win last season, the 18-stage rally will take place from April 26-29.

2018 FIA World Rally Championship for Drivers’ Standings
After round 4

2018 FIA World Rally Championship for Manufacturers’ Standings
After round 4