Thierry Neuville claims the first stage wins for the New Generation i20 WRC and sits in third; Dani Sordo ends the day in the top-eight and Hayden Paddon continues to learn the Monte's tough stages 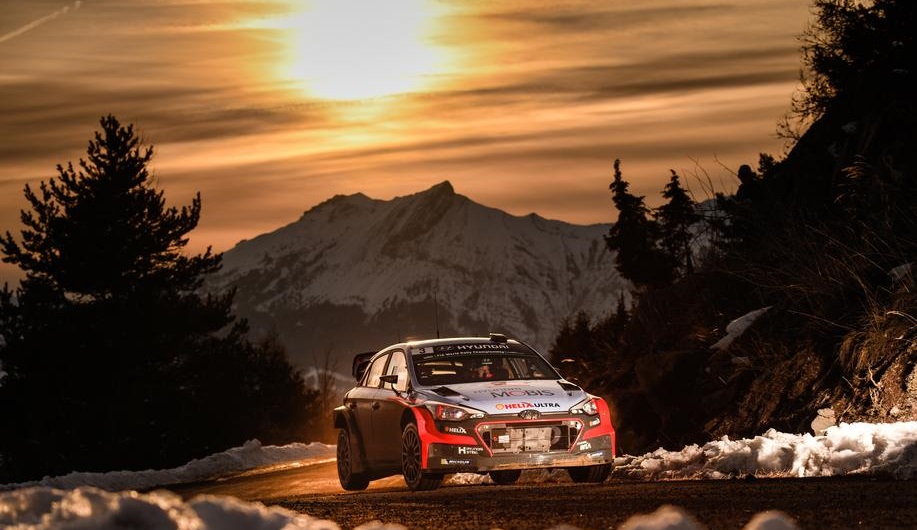 Thierry Neuville claims the first stage wins for the New Generation i20 WRC and sits in third; Dani Sordo ends the day in the top-eight and Hayden Paddon continues to learn the Monte’s tough stages

January 23, 2016  Our team heads into the final day of Rallye Monte-Carlo with the podium in sight after a convincing performance today that included our first ever Monte-Carlo stage wins.

Our drivers took our first-ever 1-2-3 finish on SS12 with Thierry winning the stage. After this dramatic first stage-win for our new car he then led a 1-2 finish on SS13!

Dani took third in SS12 and second in SS13 and finished the day two seconds away from sixth place. Hayden returned under Rally 2 after retiring yesterday morning and after a tough morning, took second in SS12 and fifth in SS13. Good tyre choices this afternoon paid dividends that helped our results and allowed the drivers to find their rhythm.

Thierry has performed consistently throughout this year’s Monte and is adapting well to the new car. His two stage wins carried him to third place and closed the gap to Andreas Mikkelsen to just 12 seconds.

“We were really able to show our potential in this afternoon’s loop,” said the Belgian, “Thanks to improved settings on the New Generation i20 WRC and a great tyre choice which gave me the confidence to push where it counted. We started the day without taking any risks, building on yesterday, but I could already feel the benefits of the new set-up. In the afternoon, we lost time on the long SS11 (Lardier et Valenca – Faye 51.55km) but we hoped the tyre choice would give us an advantage on the final stages and it definitely did! To take the first stage wins with the new car was a special moment and I could really enjoy myself. The car worked perfectly. Things are coming together step by step so tomorrow our focus will be on securing third place and aiming to take a podium finish for the whole team.”

Dani found confidence in the car after a difficult Friday. He hit a bank in the morning stages but made it to service after fixing the car. He had a strong end to the day and aims to enter the top-six.

“In the first stage, we slid and hit a bank, which damaged the rear left of the car,” said the Spaniard. “We ended the stage slowly and thankfully managed to fix this. We had a small gearbox issue at the start of the second stage but this was fixed in service. Over lunchtime service, we made some set-up adjustments and, it turned out, the best tyre choice. The long stage was not fantastic but we were on the right rubber for the final stages and could really show our potential. It was the first time all rally that I felt comfortable and enjoyed myself. We must continue like this tomorrow to try to secure a top-six finish.”

Hayden had a tough start yesterday to his first ever Monte, retiring early. He returned today under Rally 2 and after testing morning run, recovered to take second in SS12 and fifth in SS13 to finish the day positively.

“That was certainly an interesting day of rallying!” commented the Kiwi. “This morning we were determined to start fresh and put yesterday behind us, but it was an equally tough start. We tried to learn all we could but with patchy ice and snow in the long opening stage, it was really hard. I don’t think I’ve ever spun so many times in one stage, but that’s part of our learning process. We definitely made progress this afternoon, with the right tyre choice and finding our feeling in the drier conditions. I enjoyed the final stages a lot. It was nice to be part of the team’s first 1-2-3 in-stage in SS12 and I had a lot of fun both in that stage and SS13. Tomorrow, we will remain focused on our job and look forward to some more iconic Monte stages.”

We can be very pleased with today’s performance. While our drivers continue to adapt to the new car, we secured its first-ever stage wins and our first at Monte-Carlo. We will do all we can to finish on the podium tomorrow and get the new season off to a strong start!

“Today is a good example of why the Monte-Carlo rally is so special,” commented Team Principal Michel Nandan. “It’s tough, demanding and unpredictable. We saw a few high profile retirements today, which certainly benefited us in terms of overall position but we must also take some positives from our own tyre strategy this afternoon, which allowed us to show some encouraging pace. It was fantastic to take the first stage wins with the New Generation i20 WRC. The drivers reported good progress with the car today and felt more comfortable to push, which we could see from the times. We are now in a podium-chasing position and with just 12 seconds to second place. We still have things to learn about the car and we face some more demanding stages tomorrow morning, so we will keep our feet on the ground. As we’ve seen again today, anything can happen.”