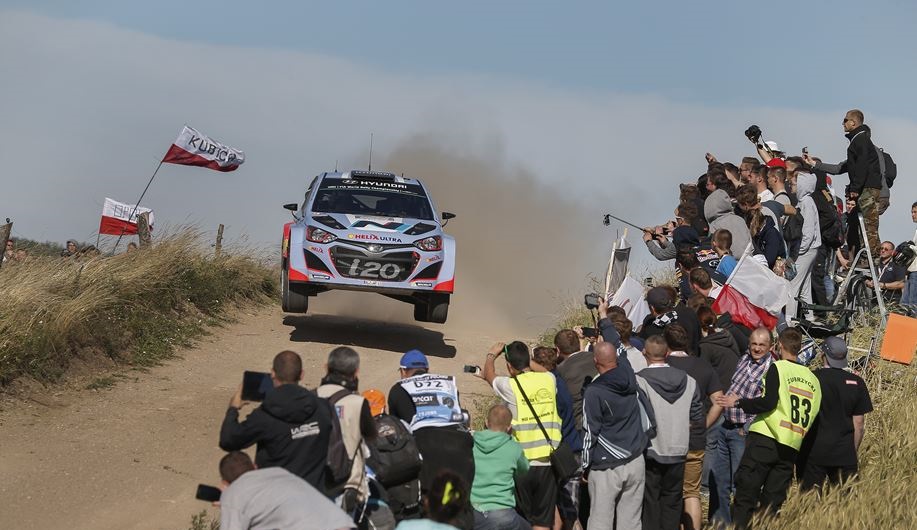 Hyundai Shell World Rally Team has completed the penultimate day of action in Rally Poland with all three Hyundai i20 WRC cars still in strong positions on the overall classification.

June 28, 2014  The Hyundai Shell World Rally Team has continued to make important progress in this weekend’s Rally Poland, round seven of the FIA World Rally Championship (WRC), with all three Hyundai i20 WRC cars still running  and in top seven positions heading into the final day.

The team’s trio of crews have all fought hard to secure their positions in the overall classification with mixed fortunes but plenty of positives to take from Saturday’s ten stages. The rally has taken in a total of 161.58km of special stages today with just four more stages to run tomorrow as the fight for the podium heats up.

Thierry Neuville (#7 Hyundai i20 WRC, co-driver Nicolas Gilsoul) currently occupies the final podium position, in third place, after a stellar performance from the Belgian today. Starting the day in tenth place, Neuville started off solidly in the first loop of Chmielewo, Stare Juchy, Babki and Goldap to build his momentum and enter the top six overall. SS15 (Baranowo) saw a number of drivers run into trouble and Neuville was elevated into fourth place as the second loop got underway. A fantastic stage win in the repeated Stare Juchy stage enabled him to continue making up ground on the podium and he took third at the conclusion of the repeat Babki stage.

Neuville said: “We have had a much better feeling today. We changed the brake system after the issue yesterday and we have found a good set-up and balance. That allowed me to push and set quick stage times. We were still careful in some places but we have made up important positions and it’s good to be in the fight for a podium. It was fun to be part of a close battle with Hirvonen which certainly spiced up the afternoon! The stage win this afternoon showed our potential so I hope we can continue with that rhythm and pace for tomorrow’s final stages, and see where we end up!”

Juho Hänninen (#8 Hyundai i20 WRC, co-driver Tomi Tuominen) finishes the day in the top six but battled with some steering wheel issue in the afternoon loop that prevented him from pushing too hard. Top five stage times in SS14 and SS15 allowed him to occupy third place for much of the afternoon but he was forced to relinquish the position throughout the final stages of the day. A determined drive from the Finnish crew ensured they finished the day and they will continue on Sunday with renewed motivation.

Hanninen said: “I’m disappointed with today. We had some issues this morning, especially in the long Goldap stage. I have had to try and adapt my driving and to find a better rhythm because I have not been satisfied. The door kept opening in SS14 and smoke was coming into the car so the mechanics needed to look at that during lunchtime service. It was a shame there was not more time because we couldn’t cure a steering issue which then hampered my afternoon. The fast sections were fine but I did not have the confidence in the slower parts. I just wasn’t able to do anything better. I gave it everything. Still, we are in the top six and we will look to make up ground tomorrow.”

The Kiwi crew of Hayden Paddon and John Kennard (#20 Hyundai i20 WRC), in their second WRC event with Hyundai Shell World Rally Team, continued their own learning curve, along with that of the team, and find themselves in seventh place overall. The crew have had a trouble-free ten stages today with noticeable improvements in their pace as they gained confidence.

Paddon said: “This rally has definitely been an improvement on Sardinia but we are still not exactly where I want to be. The car has been good but we still have lots to learn. This morning, our pace notes were not working so well so we looked at the video through lunch to make improvements for the afternoon. Our pace was definitely better. I’m fine in the smoother stages but when it’s rougher with ruts, like in the long Goldap stage, I struggle. I have to learn how to drive in these conditions but that’s part of our objective for these rallies. For the team to have all three cars at the end of Saturday and in the top seven is a very promising aspect of our day so we will be hopeful of more improvements tomorrow.”

Team Principal Michel Nandan: “It has been a generally positive day for us today with all three cars continuing into the final day. It has been a long day with some challenging stages as well as some unsettled weather in the afternoon loop. Our three crews have all handled themselves very well and we have learned a lot. Thierry had a particularly strong day, making his way into the podium positions and taking a fine stage win in SS17. He is feeling much more comfortable in the car and the stage times show that. Juho unfortunately battled with some steering wheel issue this afternoon. At lunchtime service, the team had to make some repairs to his car and we did not have sufficient time to align the steering wheel. He persevered with the problem but it was clear that he could not perform to his or the car’s potential. Hayden had another solid and trouble-free day of learning and he is improving all the time, which is great to see. Overall, we enter the final day in a good position and with more to come tomorrow.”