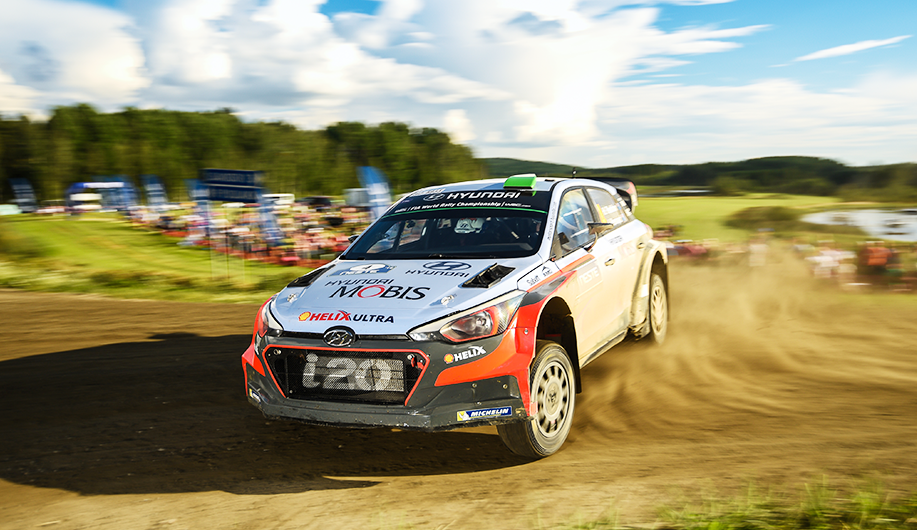 It was an exciting final day of WRC action in Finland with our drivers Thierry and Hayden involved in a thrilling battle right up to the last stage. And what a finish it was!

Just 2.3-seconds split Thierry and co-driver Nicolas in fourth place from Hayden and his co-driver John in fifth at the end of a demanding rally.

Both drivers were inseparable for most of the event, so it was unsurprising to see them so closely matched again on Sunday’s four stages  two runs each of the 6.83km Lempäa and 10.15km Oittila tests. The final pass through Oittila acted as the rally’s Power Stage.

Our drivers featured at the top end of the timesheets on all four stages! Thierry and Nicolas scored two stage wins  taking our season total to 31  including victory in the Power Stage. Hayden and John were consistent performers on Sunday with four second-placed results in the #4 New Generation i20 WRC.

“We’ve had a challenging weekend so to take two stage 1-2s, including the Power Stage, was a positive end to the rally,” said our Team Principal Michel Nandan.

Seconds Away from the Podium

Thierry and Nicolas came out on top in the inter-team fight for fourth. Our Belgians ended the rally only 4.6-seconds from third placed man Craig Breen after 24 special stages. It was a strong performance from the #3 New Generation i20 WRC crew after a tough rally.

“We have given our maximum all weekend,” said Thierry. “It wasn’t quite enough to get onto the podium but we ran it close. We had some difficulties with the car settings and grip levels so I think we can be reasonably satisfied. Competing on these incredible Finnish stages is always a pleasure.”

Hayden was also quick to find the positives from the weekend: “We were second on the road for much of the weekend so to come away with fifth place is not too bad,” he commented. “We had a decent final day even if the driving was a bit untidy in places. Power Stage points were a nice consolation.”

Top-Ten for Kevin and Seb

In their first WRC event in the New Generation i20 WRC, Rally Finland was always going to be a learning curve for Kevin and his co-driver Seb. They certainly delivered a solid result, though, moving up to ninth place.

“A fantastic experience,” commented Kevin at the end of the rally. “I am happy with how things have gone. We didn’t make any mistakes and we have a top-ten result. It’s been a real pleasure to drive the New Generation i20 WRC on these stages.”

“Kevin and Seb did everything we expected of them,” added Michel. “It’s a big task to come to Rally Finland at short notice. They acquitted themselves very professionally and fully deserve their result.”

We leave Finland after a difficult weekend, determined to learn from the experience. We will analyse the performance of the cars back at our Alzenau base in Germany.

There’s not long to wait until the next round of the WRC season  and we won’t have far to travel. Rally Germany is next, and it will be our home rally. Who can forget that memorable event back in 2014 when Thierry and Dani took a sensational 1-2 result in our debut season!

Michel is confident of another strong result on home asphalt: “It’s a special event for the whole team,” he says.“We will come back fighting.”