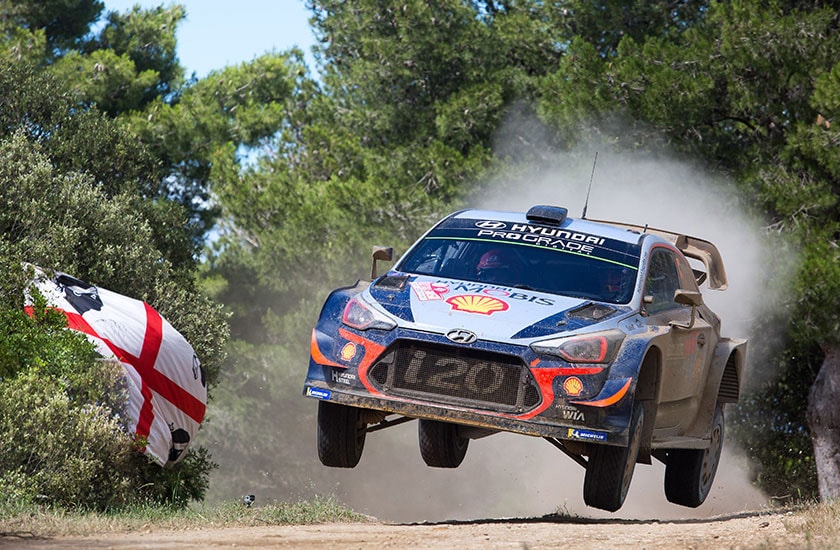 As global football fever approaches, it was perhaps appropriate for the opening day of Rally Italia Sardegna to be a game of two halves for our team. Turbulent weather was matched by equally unpredictable performances on the gravel stages throughout Friday.

Kicking things off on the opening loop, our Norwegians Andreas and Anders took two stage wins in SS2 (Tula 21.99km) and SS3 (Castelsardo 14.52km). They built a decent lead heading into lunchtime service but the afternoon loop saw the pair experience a mechanical issue.

“We started really positively and confidently,” said Andreas. “It was a great morning. Unfortunately, in SS7 (Castelsardo 2), we had some transmission problems, which left the car stuck in reverse gear. We will restart under Rally 2 but have missed a good opportunity to assert our authority on this rally.”

Championship leaders Thierry and Nicolas were first on the road on Friday. Early rain conditions reduced their disadvantage slightly but it has been hard graft for the Belgians. They concluded Friday’s eight stages in second overall, 18.9 seconds from leader Sébastien Ogier.

“I was pretty satisfied we could fight for some stage wins and end the day second overall,” said Thierry. “But it’s been a challenging day for sure. We tried to push in the afternoon but experienced some surprises. Saturday will continue to be hard but we’ll give it our best.”

Despite a tough Friday, Hayden and Seb hold a top-six position with more to come on Saturday. “We can’t be happy with our performance or results,” said Hayden. “Nothing has been clicking. We’ll sleep on it and start again on Saturday morning.”

Seven stages will be held on Saturday over a competitive distance of 146.56km, the longest individual day of the rally. The highlight will undoubtedly be Micky’s Jump, in the 29.11km Monte Lerno stage that ends both loops.

Our Team Principal Michel summarised the day: “We saw on Friday afternoon just what drama can occur in this rally, so I am sure there is a lot more entertainment still to follow this weekend.”