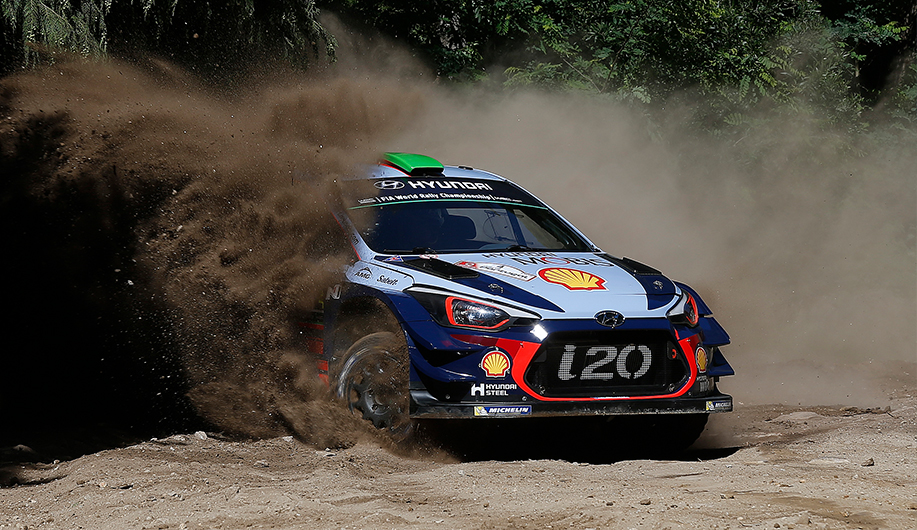 Five different rally leaders, five seconds separating the top-three, and all three of our crews claiming stage wins; it was an action-packed Friday in Portugal!

A day of highs and lows for our team ended with our Spaniards Dani and Marc in second place, 4.6-seconds from leader Ott Tanak. Showing just how close things have been, reigning world champion Sébastien Ogier is only 0.4-seconds further back in third.

“A very promising and highly enjoyable day,” said Dani. “It’s been incredibly close and I think it will continue to be like this with some tough stages to come.”

Stage wins all round

Our Corsica and Argentina winners Thierry and Nicolas got the rally off to a perfect start by winning Thursday evening’s Lousada Special Stage. It was to be the first of four wins across all our i20 Coupe WRC crews in the opening nine stages.

Hayden and co-driver Seb started Friday with the fastest time in SS2. They repeated that performance in the same Viana do Castelo stage in the afternoon loop.

“Things started well this morning with a stage win,” explained Hayden. “We had a small electrical issue in SS3, which cost us some time, but it was really close at the top and we were firmly in the battle.”

That electrical issue came back later in the day and cost our #4 crew 11 minutes of time. “We were on a flyer,” he continued, “but the electrical issue recurred suddenly and we stopped mid-stage. We can only use the remainder of the weekend as a test.”

We have decided to fix the loom on Hayden and Seb’s car to allow them to complete the rally in a trouble-free manner. Unfortunately this means they re-start on Saturday under Rally 2.

Thierry and Nicolas added a second stage win in SS6 (Carminha 2) to reduce the gap to the leaders to under nine seconds. It was a typically inspired charge from our Belgians.

However, in SS7, they encountered the slow-moving Jari-Matti Latvala and lost significant time behind the Toyota. Thankfully, their time in that stage was subsequently adjusted, which moved them back up to fourth overall, 11.1-seconds from the leaders.

“I am pleased that the Clerk of the Course has given us some of our lost time back,” said a relieved Thierry. “I felt that we could have regained some of that time tomorrow but we are now more firmly in the podium and victory fight.”

As we’ve never scored a podium in Portugal, we definitely hope to rectify this by Sunday, but it’s a very close run thing.

“We could not have asked for a more exciting start,” commented our Team Principal Michel, “and it promises to be another thrilling day on Saturday!”

Six stages make up Saturday’s schedule  a repeat loop of three stages totalling 154.56km. Starting the day with the 17.43km Vieira do Minho, crews will then move onto the 22.30km Cabeceiras de Basto and the longest stage of the rally  the 37.55km Amarante test.