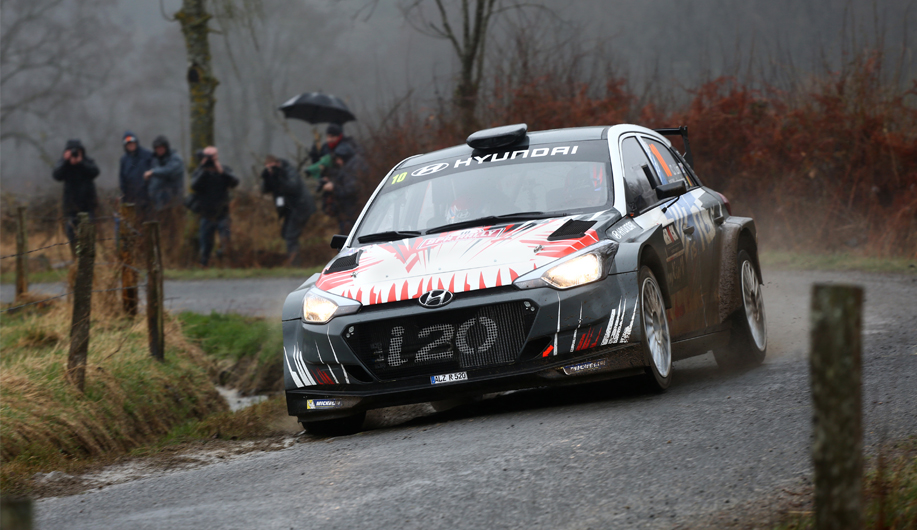 Hyundai Motorsport Driver Development Program crew Chewon Lim and Martijn Wydaeghe were left frustrated at the Spa Rally where damage to the left-front suspension ended a promising run on the Belgian tarmac event.

The pair, starting only their second rally in the New Generation i20 R5, was running in third overall when they started Saturday’s stages. A fifth fastest time on stage five, the first competitive action of the morning, preserved their overall position among the nine R5 competitors that remained after the opening day.

However, they were forced to stop shortly after the start of the following stage after an impact with a rock on the racing line.  The shock through the front-left corner of the car broke the suspension arm and put the crew out of the rally.

The rally had started on the Friday evening in familiar surroundings for former circuit racer Lim as the first stages were based around the Spa-Francorchamps circuit. On the first four stages with teams competed on sections of both modern Grand Prix layout, and the public roads that formed the original track.

Lim and Wydaeghe made a consistent start, continuing the form they showed on their debut event in the R5 earlier this month. Over the stages of the opening day they again showed they were able to compete with the more experienced crews in similar machinery. The strong performance quickly lifted the Hyundai crew into third overall as potential rivals fell away due to a mix of technical issues and mistakes in the darkness.

On Saturday, for the second and final day of stages, the rally moved out into the surrounding area, onto the slippery, muddy roads the Spa Rally is known for. Lim and Wydaeghe were well prepared after testing in similar conditions, however a moment of bad luck ended their event.

Lim said: “Obviously I’m disappointed not to have finished the rally, but I was really pleased with how we’d started. I felt quite comfortable in the conditions, even where the roads were quite slippery. Unfortunately we just had a moment of bad luck.  The stages on Friday were quite challenging, and it was certainly different driving a four-wheel-drive New Generation i20 R5 around the circuit and through the paddock compared to the Formula 3 car I was last here in. To miss out on the rest of Saturday’s running is frustrating, but I know we can keep progressing with training both in the car, and back at Hyundai Motorsport in Germany.”

Hyundai Motorsport Team manager Alain Penasse said: “Chewon and Martijn again showed strong pace over the weekend. They were able to continue the consistent form we saw in the Saarland-Pfalz Rallye and they were able to compete with the more experienced teams. To be in a position to compete for an overall podium so early in their R5 career together is obviously very encouraging. It’s obviously frustrating that they had to retire, especially from such a good position. What is important now is that Chewon takes the positives from this weekend and continues to maintain his confidence in the New Generation i20 R5 as we look towards the rest of the season.”