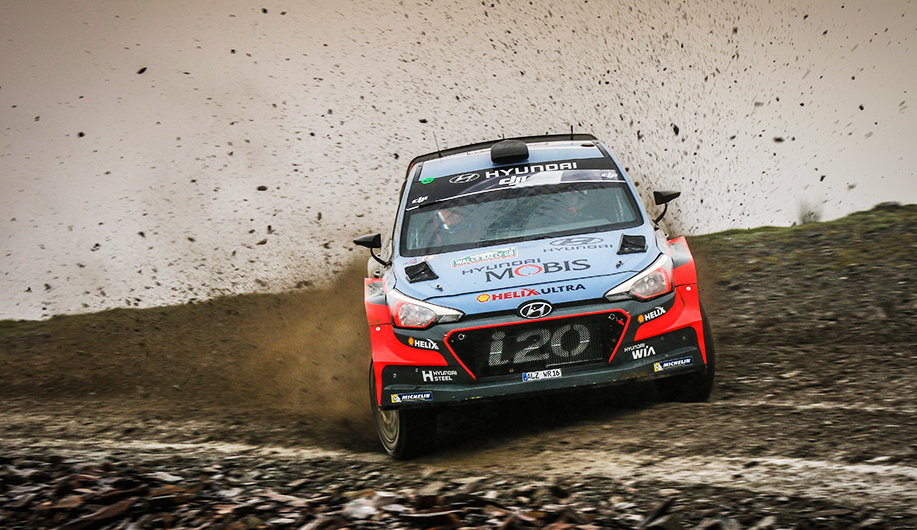 All three of our New Generation i20WRC crews sit in the top six places after a tough first day at Wales Rally GB. After a steady start, Thierry and Hayden finished with some solid times in a tight battle for the final podium position. Dani is in sixth.

Foggy conditions and wet, slippery stages greeted the drivers on the toughest day of the rally. After a 05:30 start from Deeside, crews faced over 178 kilometres of demanding Welsh forest roads.

Grip levels and visibility were changing constantly which did nothing for driver confidence, as Thierry confirmed, “Conditions are tricky and we can’t relax at all. It’s very slippery in there.”

Although Hayden started with a second place time in SS1 Myherin in the tricky conditions, none of the drivers felt comfortable with swirling fog and slippery roads.

Thierry in particular was surprised how much time he lost in this stage, which along with a mistake in stage three dropped him down the leaderboard, “I lost too much time in the fog on the first stage and we had a spin and stalled the car near the start of SS3 which cost us about six seconds.”

As the morning progressed, all three crews got more comfortable and finished the loop in fifth, seventh and eighth. There was no lunchtime service but in the afternoon all three cars benefited from the problems of other teams.

Consistently fast times in the afternoon loop saw Neuville and Paddon improve to third and fourth. Thierry had three top-three times after lunch including a stage win on the final test of the day to jump from fifth the third.

Thierry was pleased with the way he finished the day, “This afternoon has gone much better although the stages are still wet and it’s easy to get caught out. It’s now a great battle and I tried to do a good stage to finish the day in the podium position.”

Hayden also felt he was making progress and is looking forward to the rest of the weekend, ”It’s hard with changing grip levels. Sometimes you brake too early and sometimes too late, but the margins between being too slow and too fast are very small. It’s difficult to judge pace but it’s the same for everyone. I’m happy with the progress we are making, particularly compared to last year and I think we can have a big attack for the podium tomorrow when the conditions are a bit more consistent and should suit us better.”

Dani was less comfortable in the conditions, but still holds onto sixth place at the end of the day. He had a trouble-free run but found it difficult to get a rhythm with changing grip and visibility. “It was really difficult with lots of fog and slippery places. Once conditions improved towards the end of the morning the times were not so bad and I started enjoying it a bit more. I tried to do my best. But it’s not easy to learn the grip. It has been a tough day for us and we are looking forward to a more positive Saturday.”

Team boss Michel felt that it was important to balance speed and consistency on a day of attrition, “Demanding forests, difficult and changeable conditions and no midday service have meant drivers needed to balance pace with consistency. Good reliability as well as solid times from all our crews means we have two drivers in the middle of a fight for the podium and a good haul of points. The stages should suit us better tomorrow so let’s see how it develops.”