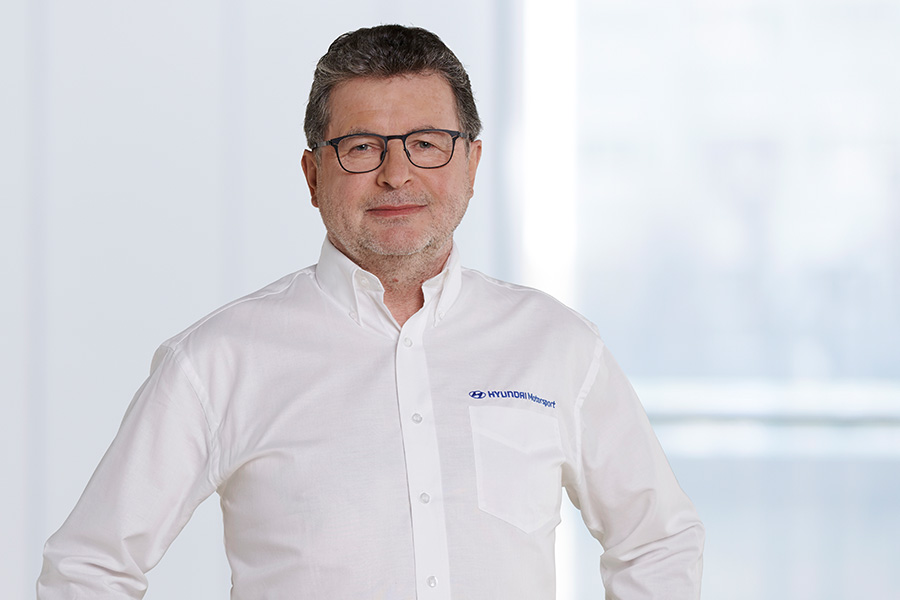 With a career background in Formula One, Le Mans 24h and World Rally, Ernst Kopp knows how to run an efficient motorsport workshop. As the heart of our operation, it is an important role with plenty of responsibilities. Ernst joined our team in 2013 and ensures our crews are given the best possible car to compete on the world’s rally stages.

How did you come to join us here at Hyundai Motorsport?
It all started in December 2012. I was initially asked if I could support Hyundai during some testing. During three days of tests, I was asked if I would be interested in working for the company full time. It didn’t take long for me to say yes, and I was hired in January 2013. It was all very quick and I haven’t looked back since.

The WRC workshop is our largest department. What is your scope of work?
The workshop is the real home of Hyundai Motorsport, and our responsibility is of highest importance. It is here that the cars are built, completely stripped and carefully re-assembled between every rally or test. It is only through meticulous attention to detail in the workshop that speed and reliability can be ensured when the car is on the stage! Not only this, but we must also ensure that these cars are built to meet the many deadlines that we face in our sport. The cars must leave in top technical condition despite the time pressures we face. For me, the crews are like our customers, so we must make them the best possible car to ensure that they are satisfied during a rally weekend.

Teamwork in the workshop must be crucial?
Our setup is three teams who work on our three cars, but they are also collaborating and communicating with each other. It’s a good atmosphere. All three cars must be the same, and if one person is collecting a part from the stores for their car, they will also bring back the same part for the other cars. There is also regular dialogue with the test team to ensure that their feedback is implemented when we are preparing the WRC cars for each rally. Each of the three teams is working towards the common goal: for Hyundai Motorsport to win the rally, and to promote the Hyundai brand.

Can you tell us a bit more about those early days with the team?
When I arrived, the workshop was a big empty hall, and my challenge was to create a department from scratch. I had a clear message that I would run the WRC workshop, the rally and test teams, with oversight on operations in the transmission department, the SSB department the electric and composite department. It was a challenge you rarely get in your career, to start something from a blank sheet of paper. I was given complete confidence from the management to build up a functional team, so we got started. We had to build everything from recce cars, service vehicles, overseas containers and the workshop itself, as well as find local contacts for equipment and supplies.

What were your emotions when the team won its maiden WRC manufacturers’ title in 2019?
Personally, I have to say the first rally we won in 2014 (Rallye Deutschland) was more emotional! We had built our whole team up from zero in the beginning of 2013, and never expected to win in our first season; we knew we had a lot to learn. It wasn’t easy sailing either: in Shakedown, Thierry had an incident and rolled the car several times. As Alzenau was only a few hours’ drive from the event, we sent a lot of people from the workshop to the service park with new parts and we repaired the car overnight to get it ready for the rally. To then go on and win the event with Thierry and Nicolas, I just couldn’t believe it and I remember those moments vividly. Of course winning the WRC manufacturers’ title in 2019 after a great battle throughout the whole season was also unforgettable, but our first win as Hyundai Motorsport meant a great deal to me.

What does working at Hyundai Motorsport mean to you personally?
For me, it means an exciting new challenge. I had been involved in motorsport since 1980 and had worked with another company for 30 years. I had already worked in Formula 1, Le Mans and Rally so I knew the industry well. But to come to a new team in 2013 was special. I came here to win rallies and world championships, and the goal now is to continue the team’s success.

How did you first come into contact with motorsport?
Motorsport has been a part of my life since I was a young boy. I can remember playing with my small motorbike in the garden when I was only 12 years old. I always knew that I wanted to travel and to work within motorsport. So I got a job in Cologne for what I thought would only be two years…but it turned out to be thirty! I am delighted that I’ve had the chance to extend this passion at Hyundai Motorsport and to play such an important role within this great organisation.

What do you like to do in your free time?
I love spending time with my family whenever I can. I also have a passion for old rally cars, for example, from the 1980s. Sometimes I also enter these cars into historic rally events. Motorsport is of course my great passion. It’s not just cars for me though, I also love historic motorbike racing and occasionally compete with my vintage bike at events.

Is there a moment or a rally win over the years that really stands out for you?
Apart from our first win in WRC at our home rally, I have to say Rally Italia Sardegna 2018. Thierry and Nicolas won by just 0.7-seconds, which is an incredible feat. To win by that margin the driver has to have complete confidence in the car, and he can only do that with a really good team behind him. The mechanics has done their job perfectly preparing the car for him, so he could push on those final stages to win the rally. All of this was going through my head in those moments – it’s the combination of true teamwork that drives us to success.

Enjoy a trip through the archives and visit our first WRC victory again: Watch a video review of the 2014 Rally Germany.