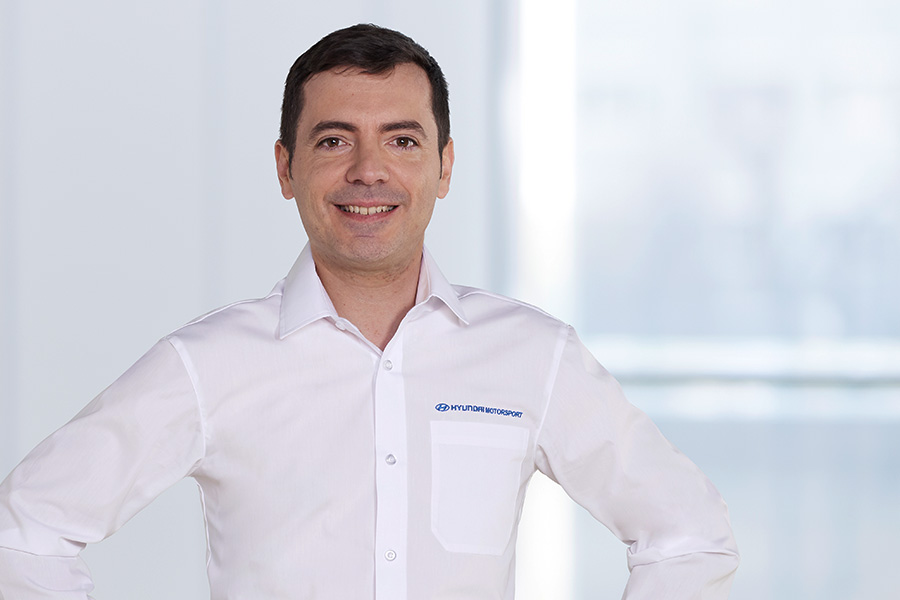 In January 2019, Julien took full management of the Engine, Transmission and Electronics divisions as they merged into a single entity: Powertrain. Julien co-ordinates the activities of all three departments in in a role that spearheads all WRC and Customer Racing engine development and production programmes at our Alzenau facility. The Frenchman has been part of the Hyundai Motorsport organisation since the very beginning and was originally tasked with getting all the engines ready for our first Rallye Monte-Carlo in 2014.

What brought you to Hyundai Motorsport?
After some years in motorsport, I was working in South America responsible for road car engine reliability, but I felt I missed something with the DNA of motorsport. Then, I saw an advertisement from Hyundai Motorsport in August 2013 for an engine development engineer. By coincidence, I was in Europe with a long stopover in Frankfurt that allowed me to visit the facilities and two weeks later I had my contract! The company was new, but I was really enthusiastic about starting a project from a blank sheet of paper with an official WRC manufacturer. In the past, I had only worked for existing teams in Formula One and rallycross. When the Customer Racing department was established I looked after R5 and TCR, and now I lead all powertrain activities within Hyundai Motorsport.

What does Hyundai Motorsport mean to you?
We are all driven by a passion for motorsport and that makes everything possible despite any difficulties we face. It’s quite tough but it’s also rewarding to work on such nice cars and products. For me, it’s passion with one target: to win. I like winning.

What is your responsibility as head of the Powertrain department?
My job is to coordinate activities between the Engine, Transmission and Electronics departments. With hybrid technologies coming into WRC in future seasons, these three departments are closely linked and need to work together to prepare. Engines are still close to my heart, and I follow all engine activities closely from their development and production, to event support. I try to help every team member as much as I can to ensure they work in the best possible conditions they need to perform. Motorsport is about teamwork.

How has your role evolved during your time with the company?
I have to be very grateful to Hyundai Motorsport. They gave me incredible opportunities and I think I am a good example of how a role can evolve within the company. I was initially hired to be an engine development engineer, but the company was still in building process and I was asked to take over the engine workshop in order to have engines ready for our first rally. It was really challenging for me because I am more of an engineer than an engine builder. When we commenced our Customer Racing activities, firstly with the R5 then the TCR, I followed both engine programs. Then in March 2017, I took full management of the engine department and since last year I have been in charge of all our powertrain activities. So my role with Hyundai Motorsport has changed four times in less than six years!

How does it feel to see the success of our WRC and Customer Racing cars around the world?
I have been doing motorsport for quite some years now but the 2019 WRC manufacturers’ title was my first and so far only world title – I’ll let you imagine how proud I was of all the work that has been done by our team since we bought our first toolbox in 2013! As I said, we are driven by the desire to win so it was a great accomplishment. Now that we have enjoyed the sweet taste of victory, naturally we want more.

On the Customer Racing side the feeling is a bit different as cars are run by other teams. In WRC it is easy – our customers are our crews. In R5 and TCR, we have hundreds of drivers and co-driver. It is incredible to see cars developed here in Alzenau win races all around the world, in so many different conditions and in the hands of so many different teams and drivers.

Do you have a stand-out moment from your time so far?
Of course, the 2019 manufacturer world title was an incredible moment, so was our first podium and our first win. But the most intense moment for me was when we loaded the cars for our first rally back in January 2014. The last weeks before that were so intense and we worked very hard, day and night, to have everything ready (just) in time. It was a great relief to see the cars able to fire up and go to Monte-Carlo. The rally itself was not the result we wanted, but we were there!

How did you get involved in motorsport?
When I was a kid, I watched every F1 race with my father however I was actually more interested in airplanes! It was mixed in my family. My father was a pilot and my uncle was a Formula One journalist – and still is. The switch really came when I got my first car at the age of 16 and it changed my mind. I had the chance to do some training with motorsport companies when I was in school and since then I have never lost the passion.

Finally, what do you like to do in your spare time?
Free time is scarce in motorsport! But I try to keep myself fit and I ride my road bike almost every day, even at night on my home-trainer if I have no other option. I still race almost every weekend across Europe. It is important for my body and my brain! My second hobby is surfing, but it is not easy as there are no waves in Alzenau!

Find out more about the vital work carried out at our Alzenau headquarters in the first episode of our 2019 BACK/STAGE documentary.