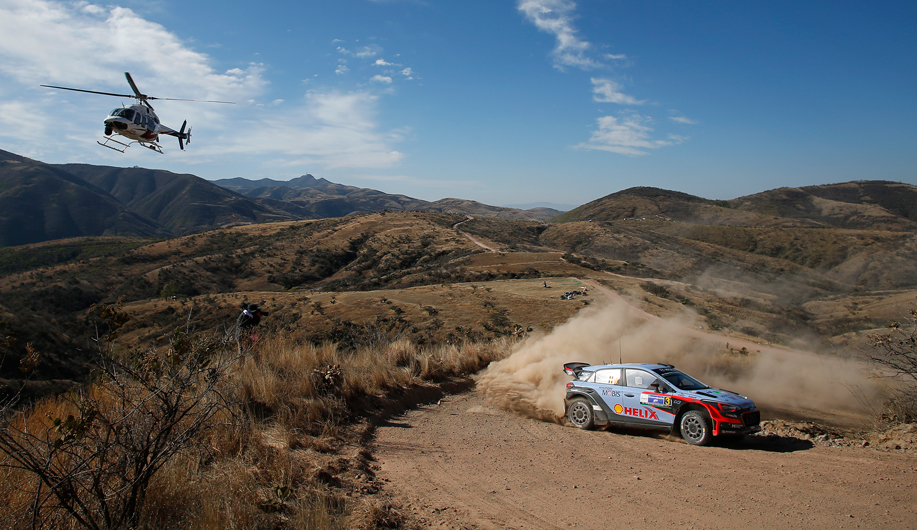 Each round of the FIA World Rally Championship (WRC) puts different pressures on our Hyundai i20 Coupe WRC and our crews. At Rally Mexico, a high altitude event, there are strains on both man and machine. Ahead of the 2017 event, we got the lowdown on the high ground from a few members of our team.

Over the course of a WRC season, our crews are pushed to their limits on a wide range of surfaces and landscapes. Whether over ice, gravel, snow or tarmac, our engineers, drivers and co-drivers know that they must be prepared to overcome an array of challenges. At Rally Mexico, it’s quite literally about battling at the top!

The itinerary for Mexico takes crews high into the Sierra de Lobos and Sierra de Guanajuato mountains, reaching a peak altitude of 2,737m above sea level. The thinner air at those heights can have detrimental effects on car and crew.

In order prepare for the event, our crews undertake a regimented programme of physical preparation. “The tough conditions mean that we really have to work on being physically prepared for what lies ahead,” says Thierry. “So, we put in some extra training ahead of the event, including the use of altitude masks so that we can become accustomed to the decreased levels of oxygen.”

Hayden adds: “Aside from that, it’s all about cardio work and making sure that we put in the extra effort. Maintaining hydration is also important. When temperatures are high then appetite levels can drop, so it’s vital to monitor how much we are eating.”

Our crews have some added support when it comes to their wellbeing on events – from team physio Danny Naessens. It is down to him to establish the correct training and preparation regimes so that our crews are fit for battle.

“Mexico is a rally like no other on the calendar,” he says. “Fluid intake is especially important on the first day, as the drivers will also be fighting against jetlag. There’s also the change of temperature to consider. We ensure that our crews take in a mixture of both water and electrolytes, which can be lost through perspiration in the heat. For Mexico, we recommend a minimum of five litres per day, but ideally towards eight or nine!”

It is not only our crews that require special attention as a result of Rally Mexico’s altitude. As one of our engine designers explains, the extreme conditions also put strain on the cars, particularly the engines.

“Rally Mexico is without a doubt one of the most challenging events for our department,” he notes. “Firstly, the decreased atmospheric pressure means that less of the air that is required for combustion is able to enter the engine, which can have a negative effect on performance. The second effect is that engines can begin to have issues with cooling, which can have very damaging effects on a car during the rally.”

However, just as our drivers have received extra preparation to survive the heights of Mexico, so too have our engines. The installation of a brand new dyno (engine test bench) at our Alzenau headquarters has allowed our engineers to put our machines to the test before they hit the Mexican stages. This is even more important with no pre-event testing permitted outside of Europe.

“In our dyno, we can create a vacuum of low environmental pressure, so that we can simulate the conditions of rallying at 3000m,” he adds, “and the subsequent effects that this has on engine performance. We are also able to alter the ambient temperature of the room so that we can prepare for rallies that take place at very low temperatures, as well as very high ones, such as Mexico.”

It is a result of diligent preparation by the entire team that we are able to go rallying in such extreme conditions. We claimed our first ever podium in Mexico in 2014, while Dani also showed his prowess there twelve months ago. Our Spaniard takes things in his stride.

“Making the swift transition from wintry conditions in Sweden to the much warmer climate of Mexico is all part of WRC life,” he says. “It’s what makes this competition so special. With the extra power we have from the cars this season, it should be even more spectacular!”