Thousands of fans lined the world famous Zócalo square in Mexico City for the opening stage of this years Rally Mexico on Thursday evening. 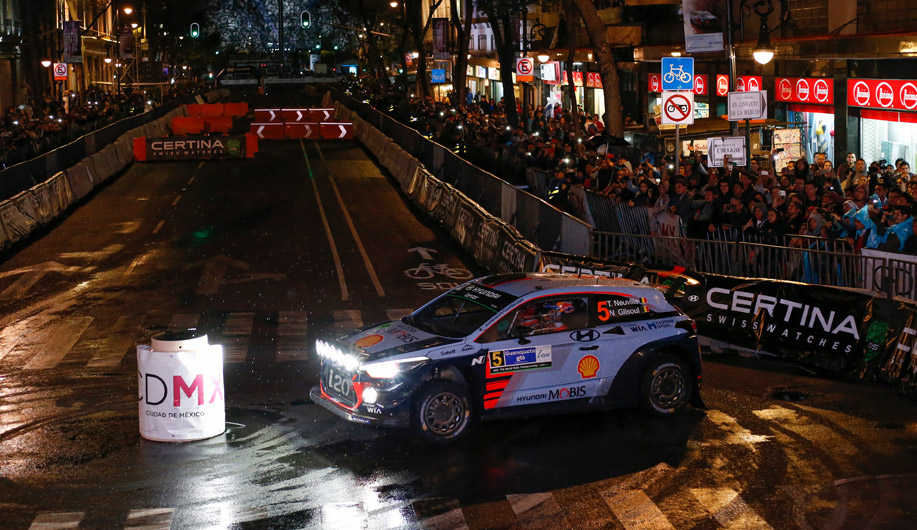 Thousands of fans lined the world famous Zócalo square in Mexico City for the opening stage of this year’s Rally Mexico on Thursday evening.

Despite wet conditions, crowds were treated to a thrilling show with WRC cars tackling a special 1.57km course twice.

All three of our crews  Hayden/John, Thierry/Nicolas and Dani/Marc – made it safely through the opening test which officially started the third round of this year’s Championship.

Zócalo Square, known most recently from its inclusion in the James Bond movie “Spectre”, offered Mexican fans the chance to see the latest specification cars up close for the first time.

The stage was set for action as thrilling as the memorable helicopter scene in the latest Bond film with Hyundai Motorsport spying a good result.

“Wow! That’s all I can say,” commented Hayden. “We knew it would be a special start to the rally but this atmosphere was something else. It was an amazing feeling to drive our Hyundai i20 Coupe WRC in such a fantastic venue. I am pumped for the rest of the weekend!”

Shaken down, not stirred

Rally Mexico is the first gravel event of the season for the new-look rally cars. Wednesday’s shakedown allowed crews to hone the set-up of their vehicles on the 5.31km Llano Grande test.

Thierry and Nicolas topped the timesheets in shakedown and will aim to put the disappointment of Monte-Carlo and Sweden well behind them this weekend.

“What a great way to start a WRC event,” said Thierry. “Rally Mexico already had probably the best ceremonial start of the entire season in Guanajuato where a lot of people always came to cheer for us and this is even more of a step forward. It’s great to be part of this incredible spectacle.”

Dani added: “It is more than just a ceremonial start and a super special; it’s a signal of the importance of WRC in Mexico. We want to use that as motivation for the rest of the weekend  and to fight for a podium this weekend. ”

With the ceremonial start and opening stage now complete, WRC teams head back to the rally base at Léon where a further 18 tests await over the coming three days, run over 370.46km. For our team, Thursday’s opening stage will leave happy memories.

Our Team Principal Michel summarised: “I think the Michelin CDMX Street is a great idea and it gives a new flavour to the Championship. For sure it’s something we will remember and it heralds a new chapter in WRC history. It was rewarding to see our drivers putting on such a show.”

A total of 154.85km of special stages await our three crews on Friday. Among the highlights will be the grueling 54.90km El Chocolate stage and a trip to the mine tunnels at Guanajuato.