Day 2: Our Belgian crew extend their lead in season-opener 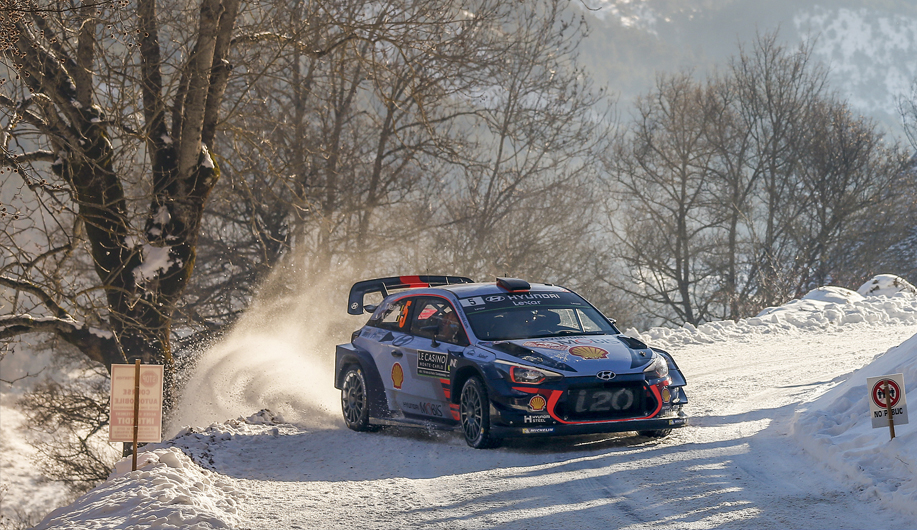 Day 2: Our Belgian crew extend their lead in season-opener

Thierry and Nicolas established themselves as the crew to beat this weekend, as they scored three stage wins on the first full day of action at Rallye Monte-Carlo on Friday.

It was a contrasting day for our team as our two crews battled against the tricky and often slippery Monte-Carlo terrain across six special stages.

While our Belgians asserted themselves at the front of the pack, Dani and Marc also moved up into a top-five position.

Driving the #5 Hyundai i20 Coupe WRC, Thierry and Nicolas started the day with a 7.8s lead over their nearest challenger, reigning World Champion Sébastien Ogier. A strong morning loop helped the crew increase their hold on the top spot. Even with some difficulties in the afternoon, they head into Saturday’s penultimate day with a 45-second advantage.

“I felt really comfortable with the car in this morning’s loop,” said a happy Thierry. “We started the afternoon well but in SS7 we found our pace notes to be set up more for ice and snow, when the terrain was actually slushier. Then, in the final stage, we had an engine stall. It was not the best end to the day but we have to be happy to lead this rally by such a margin.”

Battling into the top-five

Although our Spanish duo of Dani and Marc did not come across any major issues in their #6 Hyundai i20 Coupe WRC, they struggled to match the pace of their teammates, Nonetheless, they persevered to hold a battling fifth place by the end of the day.

“It’s very difficult for everyone out there, but we’ve lacked pace today,” admitted Dani. “We have tried to be careful and to make sure we get through the day, which we have achieved. Our aim is to find some improvements on Saturday and to target a solid points finish on Sunday.”

Our Team Principal Michel was pleased with progress but was also quick to acknowledge the challenges that still lay ahead this weekend. “We can’t take our positions for granted,” he said. “We have seen issues for some of our rivals today, which serves as a useful reminder of the challenges faced in Monte-Carlo.”

A total of 121.39km of special stages will be contested on Saturday. The morning action will begin at 8am local time with the 31.17km Lardier et Valenca test, followed by the 16.78km La Batie Montsaleon  Faye test.

A mid-morning service in Gap will follow before crews embark on the repeat loop.  Then, teams will have a second thirty-minute service before the day’s final stage, a repeat of Thursday’s 25.49km Bayons-Brezier route, this time in daylight.