Double Disappointment for both our crews 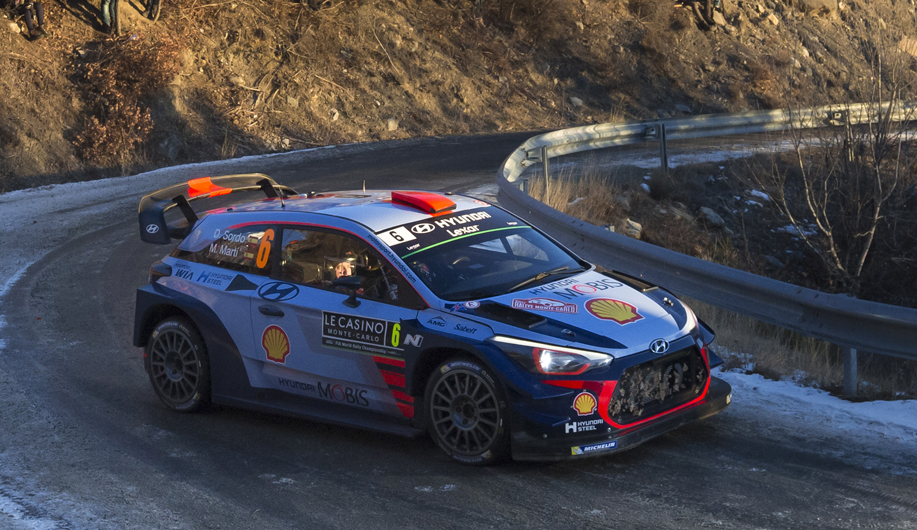 Our chances of winning the opening round of the 2017 WRC season ended in cruel fashion on Saturday afternoon when Thierry and Nicolas were forced to stop midway through the day’s final stage.

Having dominated Rallye Monte-Carlo up to that point, our Belgians ran slightly wide in a slow corner, and made contact with some concrete. The impact caused damage to the suspension of the #5 Hyundai i20 Coupe WRC, which required 30 minutes of repairs on the stage.

Thankfully, the crew were able to complete the stage and make it back to service. But the victory fight was over.

“I am very disappointed,” said Thierry, “more so for the team to be honest because they’ve worked so hard. We wanted to bring home the win for all of them but unfortunately it’s not to be this time.”

All eyes were on our Belgians with pressure expected from their closest challenger Sébastien Ogier. They picked up our fifth stage win of the weekend on SS9 (Lardier et Valenca  Oze). They then increased their lead to over one minute in the following stage. It is this high level of performance that keeps our spirits high despite the obvious disappointment.

“The pace we have shown this weekend has been exceptional so let’s see what we can salvage on Sunday,” said Thierry.

Our Team Principal Michel summarised the day with his usual pragmatism. “It has been classic Monte,” he said. “We’ve had highs and lows, challenging conditions, tough tyre choices, and stages that have caught many crews by surprise. It’s very disappointing to lose such a commanding lead, but that’s rallying.”

Dani and Marc started Saturday strongly and took two top-three stage times as they got to grips with the Hyundai i20 Coupe WRC.

“We had a much-improved morning compared to the struggles we faced on Friday,” said Dani. “The conditions were better, and we were able to find more grip. I was generally a lot happier and more confident.”

“We were very fortunate that nothing happened and we could make it to the end,” added a relieved Dani. “We need to use the positive aspects to prepare for the final stages.”

They are still inside the top-five despite their setbacks, and will push for more on Sunday.

Rallye Monte-Carlo will conclude with the La Bollène Vésubie  Peira Cava Power Stage. New regulations for this season mean that the top-five finishers will score points, compared to the top-three as it has been in previous seasons.

It gives Thierry/Nicolas and Dani/Marc the chance to finish the rally with a flourish. Michel is optimistic we can fight at the front, as we have done so far.

“We have shown what we are capable of with our Hyundai i20 Coupe WRC,” he concluded. “We have to pick ourselves up to try and salvage some points from this rally. Our team has worked hard to get the cars ready for the finale, so let’s see if we can fight for a few more stage wins on Sunday.”