Reflecting on our maiden title

Our team finishes top of the manufacturers’ standings 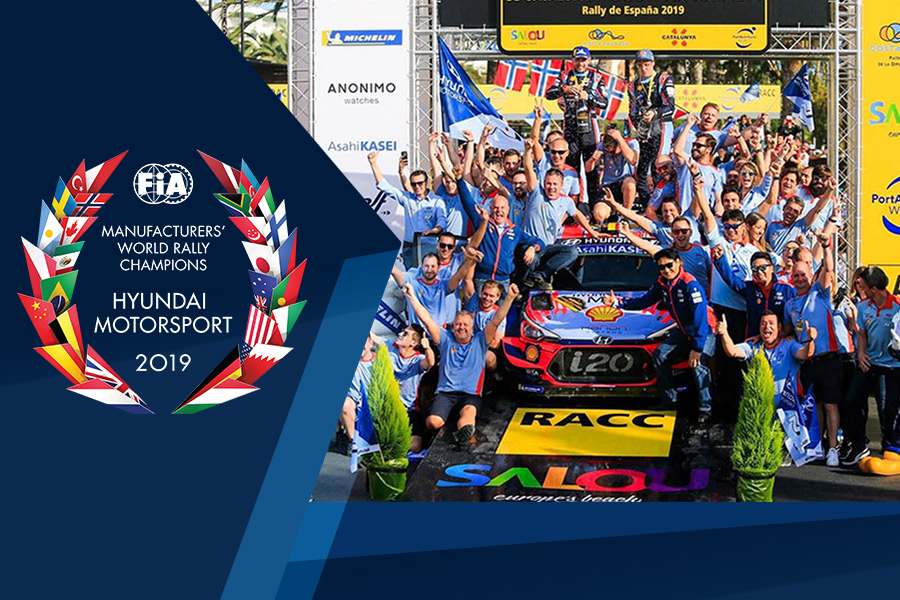 Our team finishes top of the manufacturers’ standings

We have secured our maiden title in the FIA World Rally Championship (WRC), finishing the 2019 season with a margin of 18 points over our closest rivals in the manufacturers’ standings.

The title battle was concluded in a subdued manner after the cancellation of Rally Australia due to the devastating bushfires in the New South Wales region, and we continue to send our thoughts and best wishes to all those affected.

Delighted drivers
It was one of our most versatile performance as the i20 Coupe WRC performed consistently and competitively on all terrains. Our Belgian crew, Thierry/Nicolas, scored three of our four wins with Neuville finishing the season in second in the drivers’ classification.

“This has been a very special journey for us, and it is a pleasure to say we are now an FIA World Rally Championship winning team,” said Thierry. “There have been so many highlights along the way; every victory has been important, but more than just the results, the team has grown so much over the six seasons.”

Dani/Carlos picked up their first victory with our team in Sardinia in June.

“We have been leading the championship for most of the season and I think this is a very well deserved title for the entire team. I’ve seen the Hyundai Motorsport family growing and progressing season by season, and I’m really pleased to finally clinch our first title together,” added Dani.

Craig said: “It was very clear this year that everyone in the team was pushing really hard to try and make this dream happen. The way that the team has been so strategic, using different drivers at different events, it has allowed us to be in the position to complete the job.”

Andreas/Anders took three podiums and played a role in our best result of the season – a 1-2 finish at Rally Argentina. Sébastien/Daniel frequented the top three in Chile, underscoring the strength in depth of our squad this season.

The journey to success
The manufacturers’ title has been the result of an intense and determined team effort since our establishment at the end of 2012. Starting from a blank sheet of paper, our team quickly built up a professional WRC outfit and a brand new car based on the roadgoing i20 model.

From the start of 2019, under our Team Director Andrea Adamo, our objectives were clear: to fight for our first world title. Against fierce opposition from competitive rivals, our team dug deep to maintain – and then extend – our advantage at the top of the table before the season’s conclusion.

Head of Product Division, Executive Vice President of Hyundai Motor Group, Mr. Thomas Schemera said: “Hyundai Motorsport has truly captured the spirit of Hyundai and our N high-performance brand. The successes they have enjoyed over many seasons have been incredible to watch, and the influence on Hyundai’s road vehicles cannot be underestimated.”

“It has been a privilege to watch the team’s determined fight for the championship – and to see them secure Hyundai’s first-ever WRC title against such tough opposition.”

Our team will now use the off-season to prepare for the 2020 FIA World Rally Championship with a revised crew line-up but even more heightened ambitions for success.