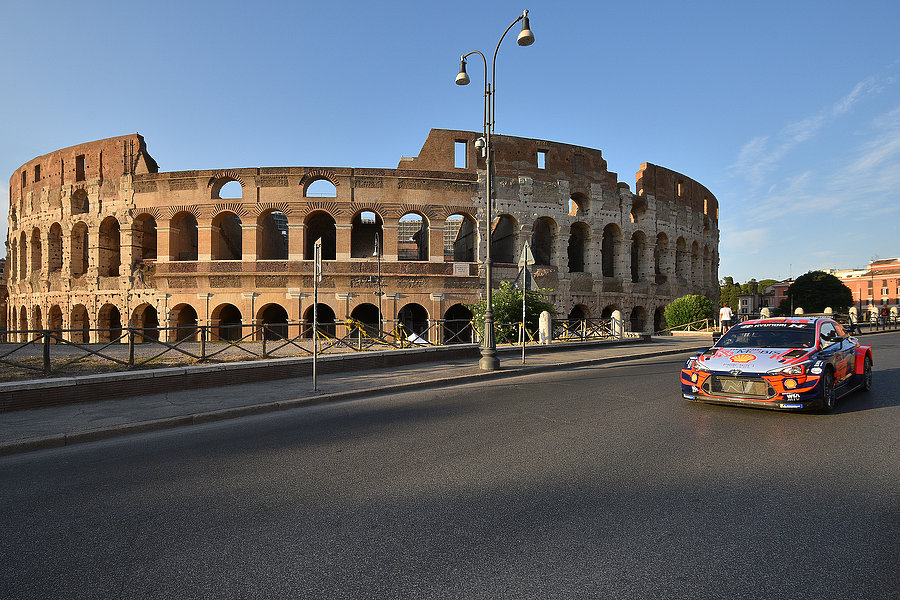 Rome wasn’t built in a day, as they say, and so – 134 days since Rally México – we returned to competitive rally action near the Italian capital.

We entered two i20 Coupe WRC cars into the Rally Stars event, reserved for current WRC machinery, and five i20 R5s into the main Rally di Roma Capitale, the opening round of the FIA European Rally Championship (ERC). Back to business in style!

Run over two days of competition, the event covered almost 200 kilometres of special stages, with safety considerations of paramount importance. From the service park in Fiuggi, to the south-east of Rome, crews tackled two loops of three stages on Saturday, and a trio of three timed tests on Sunday.

Our Spanish WRC crew Dani and Carlos returned for the first time since Mexico and took a comfortable Rally Stars win. The duo used the event as a test and development opportunity ahead of the planned re-start of the WRC season in September, and particularly for the tarmac of Rallye Deutschland.

“It has been fantastic to be back,’ said Dani. “To have the opportunity to go rallying again is something we all value and greatly appreciate. We have used this rally as an opportunity to test many different parts of the car. It’s been a nice rally overall and great to be rallying again!”

Joining them was our Junior Driver Pierre-Louis Loubet and his co-driver Vincent Landais, who made the most of their competitive debut in a 2C Competition-run i20 Coupe WRC car to finish second.

Top-five for the R5

Five i20 R5s were entered into Rally di Roma Capitale, following an unbroken period of support to our valued customers since the start of the COVID-19 pandemic.

Craig Breen and Paul Nagle got their full-time ERC season off to a positive start with a fourth placed finish with BRC Racing Team, and support from MRF Tyres.

“Being part of this rally has been an absolute pleasure from start to finish,” said Craig. “I have really enjoyed myself. After all the hard work, all the testing, it has been immensely satisfying to have been competitive with our MRF Tyres. Both the tyres and the i20 R5 performed faultlessly. We still have some work to do but the foundations are solid.”

There were mixed fortunes for our other i20 R5 crews, including Customer Racing Junior Drivers Grégoire Munster (seventh), and Callum Devine (retired).

Our Team Principal Andrea commented: “Craig has done a nice job in the i20 R5; we know that MRF is building up its tyre development and they are pushing very hard. It is not easy to come into a championship as challenging as the ERC and to be immediately as competitive as the others.”

“I’d like to add some words for Jean-Baptiste Ley from Eurosport for the warm welcome he has given us, and to the FIA, ACI Sport and Bruno de Pianto, organiser of Rally di Roma Capitale, for allowing us to be here this weekend. The sheer ambition and effort they have made to run this event against all odds, and especially under COVID-19 conditions, is amazing. Only people with such vision, determination and passion for motorsport can make such a thing happen, so our thanks to them.”