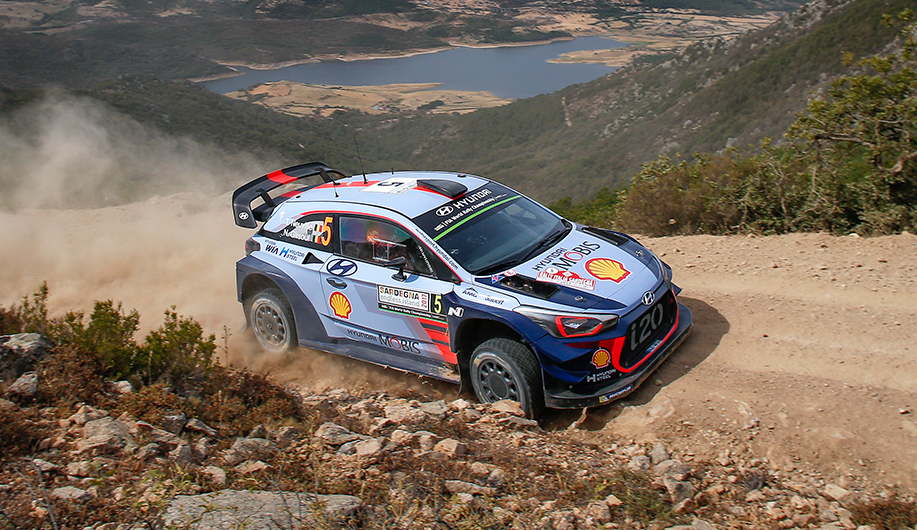 “One of the toughest gravel rallies of the season,” was how Hayden described Rally Italia Sardegna in the build-up to this seventh round of the 2017 WRC. And he was absolutely right.

Our Kiwi with his co-driver Seb had an eight-second lead of the rally at the start of Saturday’s six stages. But a small miscalculation in SS13, during the afternoon loop, cost them a shot at their first victory of the season.

“I am devastated,” said Hayden after the stage. “It was a schoolboy error. I turned in too early and clipped a bank. That was that. There is no one to blame but myself, and I am hugely sorry for the team and our supporters.”

Picking up the pieces

Thierry and Nicolas were keeping the pressure on their colleagues during the morning loop, but they too were denied a chance of taking the lead.

Brake problems at the end of the opening loop cost them over a minute, dropping them to fourth overall. With Hayden and Seb’s subsequent issues, they moved back up into the podium positions in third.

“A frustrating end to the morning,” summarised Thierry. “We are still in with a shout of the podium so we can’t be too disheartened. Without the brake problems, though, we would have been leading this rally.”

The Corsica and Argentina rally winners were thankful to still be in the rally at all. “There have been issues for most crews so, on balance, we have to accept these things can happen,” added Thierry. “The mechanics did a fantastic job to fix the car during lunchtime service. They allowed us to keep going and to still be in podium contention.”

Dani and Marc were first on the road after their Friday struggles. Paddleshift problems and a puncture prevented them from making up much ground on the second day.

“We have not given up despite the various issues we have faced,” reflected Dani. “We wanted to enjoy the stages today and we just fought through as best we could.”

Looking at the positives, all three of our crews have taken stage wins this weekend. Hayden and Seb opened their Sardinia account on the first stage of Saturday morning, SS10 (Coiluna-Loelle), while Thierry and Nicolas added their second stage win of the weekend in SS11 (Monti di Alá).

Michel is hoping we can finish on a more positive note on Sunday. “A podium in Sardinia is no mean feat,” he said. “We will try to focus on securing that on Sunday and seeing if our crews can score some Power Stage points. That would be a small consolation.”

The final day of Rally Italia Sardegna takes in four stages  a repeat loop of the 14.06km Cala Flumini and the 6.96km Sassari-Argentieri tests.

Just 42.04km of stages will be contested, offering all crews a final opportunity to shine under the Sardinian sun.