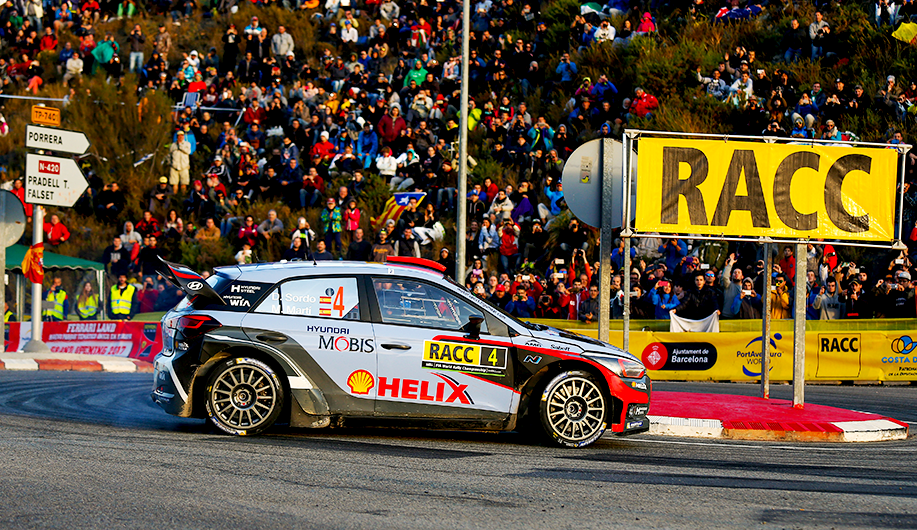 “It’s been an incredible weekend and I cannot thank the fans enough for all the support. I can honestly say we did all we could today but we just couldn’t do anything to stop Sébastien.”

After leading for much of Rally Spain, those were the thoughts of Dani at end of the event as he led a 2-3 finish ahead of Thierry. It’s our second double and tenth individual podium of the year, which was backed up by Hayden in fourth. That is his best WRC result on tarmac, while Kevin secured his best ever WRC finish in seventh, to round of a strong weekend for our team.

Pushing all the way

Dani kept up the pressure over all three days with a string of top three stages times, as well as an extra point for third in the Power Stage. In the end though he was forced to settle for second at the end of the unique, mixed-surface event in front of his home fans.

“We wanted so much to take the win for the team and the fans but he was too strong. Still, to finish in second place after such a competitive event is something to be proud of. It’s our second podium of the season and we worked really hard for it. The team has done a fantastic job to prepare a competitive car, and it’s very encouraging that the overall result has been so positive for everyone.”

After three consecutive podium finishes, Thierry is the form driver of the second half of the season and with this result is now tied with Andreas Mikkelsen in second place in the Championship.

“It’s been a good weekend. I don’t think we could have got anything more out of the car in this rally. I took things carefully this morning. We did a good job to get into the podium positions so we didn’t want to waste that effort. There are a few more competitive performances to come from us this year, I’m sure!”

Four in the top seven

With a couple of top-two stage times on Sunday, Hayden sealed a fine fourth position as he continues to make progress on tarmac. “It’s been a good final day for us and a positive event for the entire team. We have continued with our learning curve and kept the pressure on. Even if we weren’t able to finish on the podium, I’m happy with what we’ve achieved over the three days.”

Kevin was also delighted with his seventh placed finish, “It’s brilliant to register our best ever WRC result here in Spain. It’s been a very valuable learning weekend for us, and I’d say it is “mission accomplished” as far as the result is concerned.”

“There are many positive lessons we can take away from this rally,” said our Team Principal Michel as he summarised the positive weekend: “We wanted to fight for the win today but it just wasn’t to be on this occasion. Dani has had a fantastic weekend in front of his home crowd and thoroughly deserves this result. To have two crews on the podium, with Thierry taking his fifth podium of the season, is a very satisfying achievement. It’s even more pleasing when we see Hayden taking his best ever tarmac result in 4th and Kevin taking his WRC career best.“