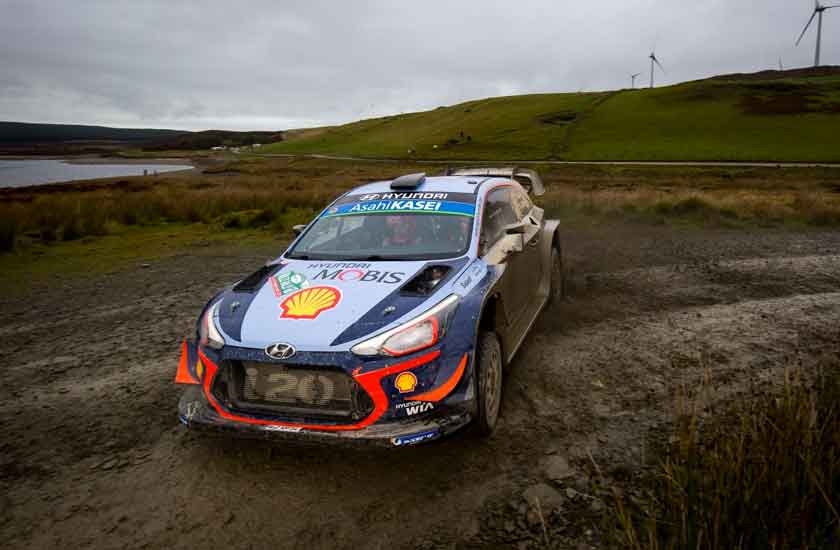 Wales Rally GB just wouldn’t be the same without rain, mud and slippery conditions, so Friday’s action was a fitting way to begin the 11th round of the 2018 WRC season.

Thierry and Nicolas took a stage win through the first Slate Mountain run after a steady start to proceedings. Our Belgians then finished the day strongly with a more spirited afternoon loop and a second stage win.

Things can only get better

“Things improved in the afternoon, both in terms of the handling from the car and the stage conditions,” said Thierry. “I don’t think I could have given it any more. Ott has a big lead but we have a very long, demanding day ahead of us all on Saturday.”

Our two other crews, Hayden/Seb and Andreas/Anders, also made improvements to the handling of their i20 Coupe WRC cars during lunchtime service.

We tried to have a clean day,” said Hayden. “We kept focused on our plan with road order playing quite a key role in the afternoon. We will have a more beneficial starting position on Saturday and will look to make some gains.”

Push the feeling on

Andreas, too, found a better feeling from inside the cockpit after struggling for pace in the morning. “Not a day to remember for us,” he said. “We made some changes over lunchtime service, which helped get the feeling back. Unfortunately we still didn’t have the pace to go really fast. We’ll push on.”

Our Team Principal Michel gave an honest assessment of a difficult opening day: “ All three of our crews made it through the first full day without real incident. Thierry has done well to end Friday in second overall, but there’s too much of a gap to the leader for us to be satisfied today.”