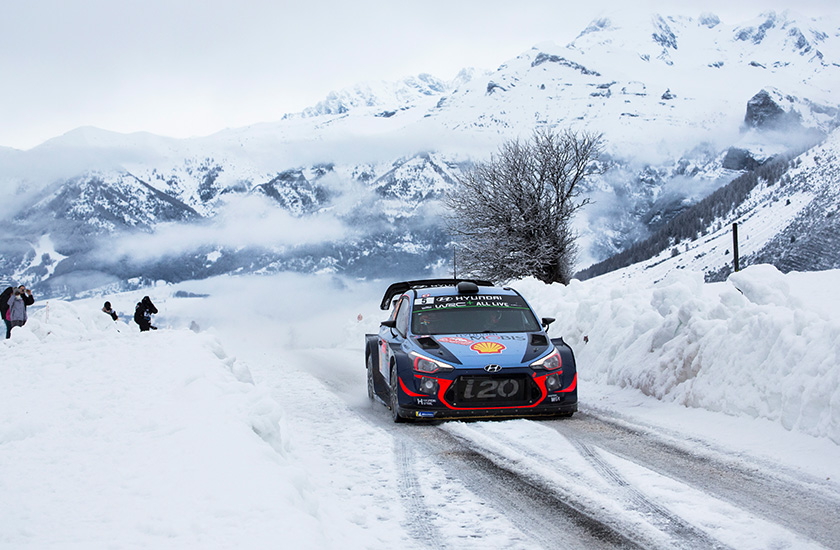 Sometimes when it rains, it pours. In Monte-Carlo on Saturday, however, it was snow that dampened our spirits. Despite three stage wins, we find ourselves down in seventh overall after our podium hopes were dashed.

After issues for Thierry and Nicolas on Thursday, and on Friday for Andreas and Anders, it was our Spaniards Dani and Carlos who were struck with misfortune on the penultimate day.

While defending their top-three position, our #6 crew ran into trouble on the slippery opening stage, SS9. “I am really disappointed,” said a dejected Dani. “We didn’t push too much but we suddenly lost grip at the front and went off. With no Rally 2, that was our Monte-Carlo over.”

Stage wins and struggles
Contrasting fortunes for Andreas and Anders in SS9 saw them take the fastest time but the day wasn’t without its issues.

“It was proper Monte conditions out there early on,” said Andreas. “We had a spin in a straight line, and still came away with the stage win. The afternoon was much the same. Our eyes are firmly on the Power Stage.”

Thierry and Nicolas continued to mount a recovery charge. As second on the road, it was not an easy task but they persevered to move up to seventh overall, taking stage wins in SS12 and SS13.

“It has been really tricky at times,” reflected Thierry. “In the first loop, we were really struggling everywhere, particularly as second on the road. The second loop was also changeable. My aim is to keep up a good rhythm and pace, and do all we can to try and gain another position or two.”

At the end of Saturday’s schedule, our Team Principal Michel Nandan summarised: “The conditions today offered excitement for the spectators but it was a bad day for us. Despite picking up three stage wins we are out of contention for the results we want to be chasing, and know we can achieve.”

We will now prepare for the final day of a frustrating rally with four stages left to contest. Our two remaining crews will attack a repeat loop of two stages including two climbs up to the legendary Col de Turini, and a final chance for drivers’ championship points in the Power Stage.