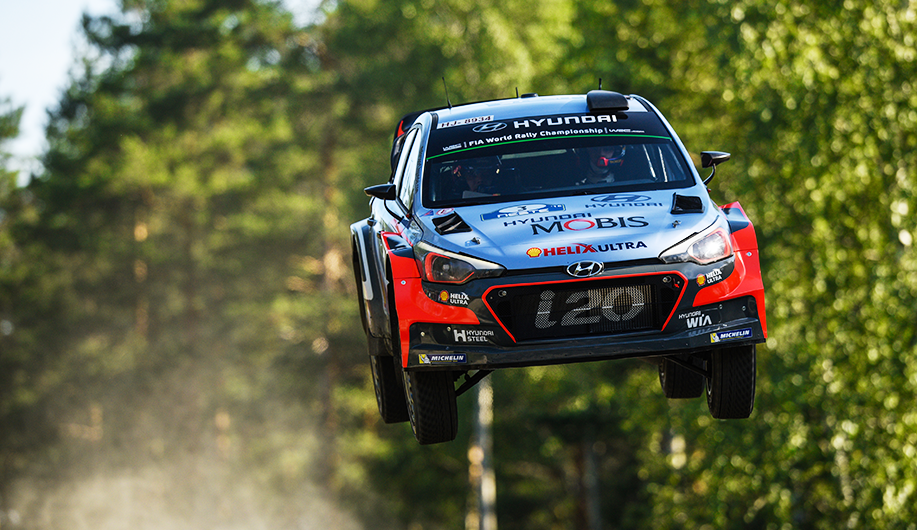 The second half of the 2016 WRC season is well and truly underway in Finland! And we’ve made an encouraging start.

We are fielding a three-car entry in Finland, a rally in which drivers compete on some of the fastest stages on the WRC calendar!

Thierry and Nicolas are in the #3 New Generation i20 WRC with Hayden and John in the #4 car. In a late change to our driver line-up for this event, Kevin and Seb are on driving duties in the #20. They are replacing Dani and Marc, while Dani recovers from an injury picked up in pre-event testing earlier this month.

Preparations got back on track with a rescheduled pre-event test last weekend, as well as a successful shakedown on Thursday. We’re chasing our first-ever Finnish podium, and it looks like a realistic target based on the opening day.

“If we look at the overall classification, I think we can be reasonably satisfied,” commented our Team Principal Michel Nandan. “Finland is a tough test of man and machine! We need to make sure our driver crews have the confidence they need from the car on these fast stages.”

Continuing on from their spectacular win in Sardinia and fighting fourth in Poland, Thierry and Nicolas are on a podium charge once again. At the end of Friday’s stages, our Belgian crew are in a strong third position on the overall classification.

“It’s been a day of two halves,” said Thierry. “We’ve been pushing to the maximum all day. We didn’t see any benefits in the morning loop but the results were better in the afternoon. We know how demanding this rally is and there’s a long way to go!”

It’s a special weekend for our Dutch star Kevin and his British co-driver Seb as they make their debut in the New Generation i20 WRC.

The duo took part in Portugal and Sardinia rallies earlier in the season using a 2015-specification car. Replacing Dani and Marc in Finland, they have a New Generation i20 WRC at their disposal for the first time.

Despite picking up some front suspension damage on the afternoon loop, Kevin has had an enjoyable time in the cockpit of the #20 car.

“It’s an epic experience driving this car,” he said. “Of course there are little things we need to improve in all areas but it’s been a pretty satisfying Friday. We didn’t do Poland so it’s been tough to get up to these incredibly high speeds. We need to work to find the confidence to drive flat out. I’m looking forward to more action on Saturday!”

Not Far Off The Pace

Hayden and John are in touch with the podium contenders at the end of the first day of Rally Finland. Our Kiwis, who finished third in Poland, are just 14 seconds behind Thierry and Nicolas after 12 stages.

“If you take the top two drivers out of the equation, we are not too far off,” admitted Hayden. “It’s been a far from perfect day but we’ve still tried to enjoy ourselves. We struggled a bit with the car on the loose and slippery conditions. We will come back fighting on Saturday.”

Finland is renowned for its ultra high-speed stages and exhilarating jumps. Saturday’s itinerary will include the legendary Ouninpohja which will form part of a repeat loop of four demanding stages.

A total of 150km of stages await drivers, co-drivers and teams on the penultimate day of the rally  with our team on a push for the podium.