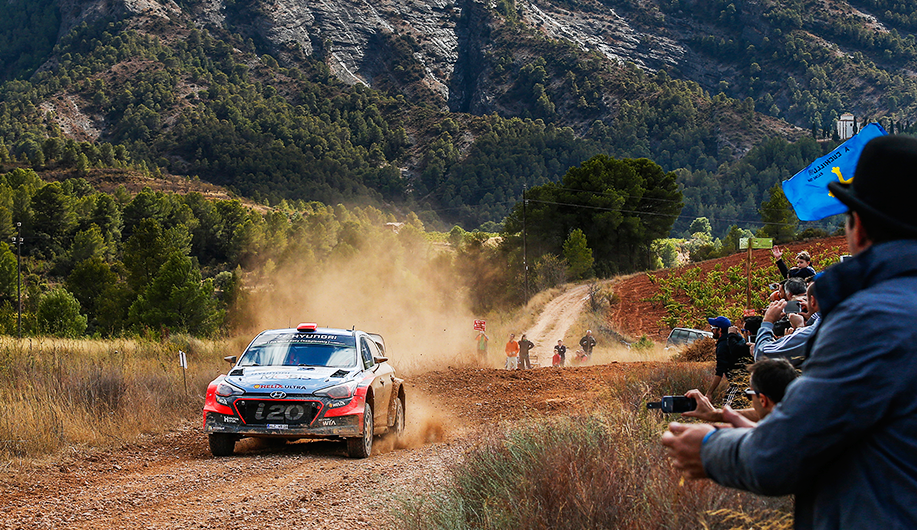 All three of our i20 New Generation WRC crews sit inside the top-five Rally de España this evening, with a stellar performance from Dani Sordo and Marc Martí seeing them leading the way on the first day of their home rally.

Wet weather on Friday morning increased the difficulties already posed to the drivers by the mixed surface layout and the challenge was made even more taxing by the lack of a lunchtime service.

As slippery conditions caught out several crews, the drivers only had a remote tyre-fitting zone in Ascó between the morning and afternoon loops to attempt to fix any damage done to the cars.

It was a glorious return to Spain for Dani and Marc in the #4 New Generation i20 WRC, as they claimed two stage wins on the afternoon loop.

Roared on by a passionate Spanish crowd, Dani took consecutive wins on SS5 and SS6 to finish the day with a 17-second lead over nearest challenger Sébastien Ogier.

An understandably delighted Dani said after the race: “It has been an unbelievable day. I am really pleased to be leading the rally, particularly in front of all these fantastic Spanish fans.”

Thierry and his co-driver Nicolas (#3) also remain in the hunt for a podium finish, despite a dramatic afternoon. The Belgian pair led after a stage win in SS2, but a spin in SS5 saw the front of their car damaged. They recovered quickly and finished the day in a fighting fourth.

Thierry said: “It’s been a day of two halves. The opening stages this morning went well, despite the conditions. Unfortunately we got unlucky when the car spun, hit a tree and stalled. We fixed some of the damage and minimised the time loss and will look to push on tomorrow.”

In their 100th rally together, Hayden and John (#20) also experienced their fair share of challenges on their way to an impressive fifth-place finish by the end of the day.

They took second place in SS2, although an issue with the anti-lag system hampered their efforts all day. Hayden confirmed: “We have been battling a technical issue all day which has prevented us from doing too much more. Still, we have got through it and tomorrow is another day, as they say.”

Looking to gain experience on the mixed-surfaces of Spain, Kevin and Seb (#10) showed steady improvement as the day progressed. A magnificent second place finish in SS5 completed our second stage 1-2 of the day. However, engine trouble late in the day saw them drop outside of the top-ten.

“It’s a disappointing end to the day with the problems we’ve had, but all in all it has been a positive experience out there. Second in SS5 was a real boost to the confidence”, said Kevin after the final stage.

With three crews in the top-five, it came as no surprise to see Michel in such a positive mood at the end of the day. He said: “What a day! We are not accustomed to competing in such wet and slippery conditions as we have faced so far this weekend. With that in mind, I have to commend all our crews on making it through the day so encouragingly. We can’t really complain with three cars inside the top-five and Dani heading the field, but there’s still a long way to go!”