Stage wins and struggles in Wales 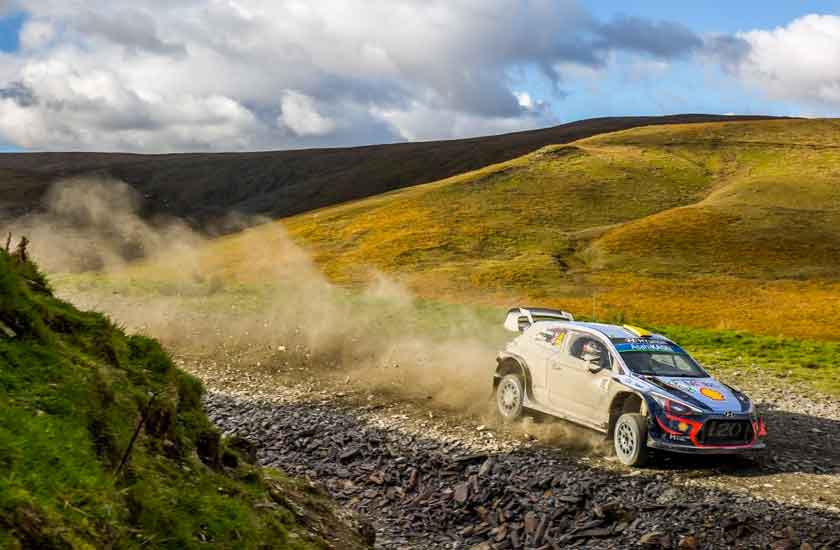 The 2018 WRC title fight took another dramatic twist on Saturday in Wales Rally GB as Thierry and Nicolas dropped from second to eighth place after going into a ditch in the morning loop.

With all eyes on the championship battle, there were further surprises later in the day with Ott Tanak retiring and Sébastien Ogier inheriting the lead. For our Belgians, though, there was little consolation after a rare mistake.

“It’s part of the game when you are pushing as hard as we do all the time,” said Thierry. “Of course it is a shame, and we’ve paid for it, but we won’t give up.”

Saturday’s itinerary covered nine stages over a total distance of 150km. Crews did not have the luxury of lunchtime service, instead just a remote tyre fitting zone at Newtown following runs through Myherin (20.28km), Sweet Lamb Hafren (19.95km), Dyfi (19.48km), Gartheiniog (11.26km) and Dyfnant (8.30km). The four opening stages were repeated in the afternoon.

Andreas and Anders took three stage wins during the day and have closed in on a top-five position with five stages remaining.

“It has been a really good day,” said Andreas. “I’ve been happy with the car; it has been very nice to drive, stable and predictable. We’ve tried to give it a bit of a push but without going crazy and we’ll see what happens tomorrow.”

Hayden and Seb completed Saturday in seventh overall but with their sights set on more gains on the final day. “Overall, I have been happy with the balance and have felt comfortable and in control,” said Hayden. “It has been closely fought so we have been searching for very small improvements.”

Our Team Principal Michel summarised: “It has been another one of those frustrating days that seem to be a frequent character of our rally weekends lately. We need to dig deep for the final morning and perform like a team that wants to be in the championship fight.”

Five special stages remain on the final morning of Wales Rally GB, including the Power Stage, which will be run as the second timed test. The 10.06km Elsi test will get the action underway at 7.22am before Gwydir plays host to the Power Stage and then the first run through Great Orme Llandudno. Both those latter stages will be repeated after a tyre-fitting zone at Dolgarrog.