The Hyundai Shell World Rally Team have shown a steady rate of improvement during the opening day of Rallye de France, round 11 of this years FIA World Rally Championship (WRC). 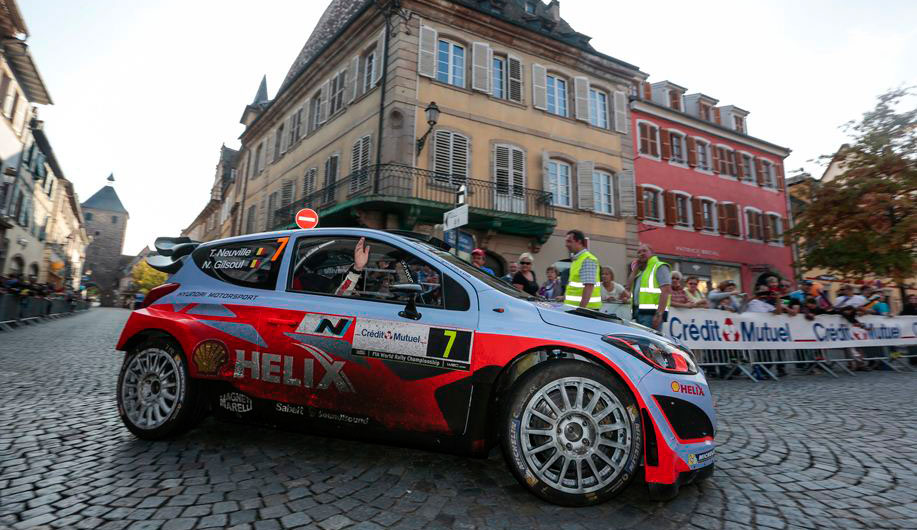 The Hyundai Shell World Rally Team have shown a steady rate of improvement during the opening day of Rallye de France, round 11 of this year’s FIA World Rally Championship (WRC).

October 3, 2014  The tarmac terrain of Rallye de France has offered the Hyundai Shell World Rally Team a stern test on the opening day of this weekend’s rally but the team has fought hard to make continuous improvements throughout the day.

In dry conditions, the team has tackled the 11th event on this year’s FIA World Rally Championship (WRC) in determined fashion with three Hyundai i20 WRCs contesting the rally. Today’s itinerary has taken in a repeat loop of three stages  Col de la Charbonnière (11.11km), Vosges-Pays d’Ormont (34.34km), and Pays de Salm (9.59km)  as well as an evening Super Special Stage in Strasbourg, with all three driver crews making progress during the day.

Dani Sordo (#8 Hyundai i20 WRC, co-driver Marc Martí) returns to the Hyundai Shell World Rally Team for his first rally since his second place finish in Germany in August, and settled into a strong rhythm on the challenging French stages. The Spaniard made his way up to fourth overall at the conclusion of the first day.

Sordo said: “We’ve had a pretty solid start to the rally and it has been good to be once again behind the wheel of the Hyundai i20 WRC. I wasn’t totally happy in the first stage and we had a bit of a moment early on but we were able to pick up confidence and set good times in the subsequent stages. The car has generally been good and we had a trouble-free afternoon loop. There is always room for improvement so we will be looking for more pace tomorrow – but for day one I am quite happy.”

Bouffier said: “It is a pleasure for me to be driving in my home rally with the Hyundai Shell World Rally Team and I am grateful for the opportunity to compete in front of my home supporters. It wasn’t a straight-forward morning and I wasn’t completely comfortable with the handling of the car. However, in the afternoon loop, the car felt more stable and we were able to show some improvements. Overall, it’s been tough at times today but the team has done a good job and I am looking forward to tomorrow’s stages, in which I am sure we will continue to make gains.”

For Thierry Neuville (#7 Hyundai i20 WRC, co-driver Nicolas Gilsoul), the first day in France has been a tough one after he endured a broken turbo at the end of the second stage, which caused a loss of power for the final kilometres of the second stage and the entire third stage. The problem lost the Belgian a total of two-and-a-half minutes, relegating him down to 21st place overall. Some excellent work during lunchtime service by the Hyundai Shell World Rally Team enabled Neuville to return to the rally for the afternoon loop, and he made his way up to 11th by the end of the day.

Neuville said: “It’s been a mixed day for us and affected quite a lot with a turbo issue that we experienced in the morning loop. We had a reasonable start, getting used to the car and the tyres but around 5km before the end of SS2 we had a sudden loss of power. I had already lost about ten seconds earlier on in the stage after getting stuck in a ditch but we were unable to cure the power loss problem, which carried all the way through the third stage. We lost a lot of time but the mechanics did a tremendous job to get us back into the rally for the afternoon. I was happy to be back and to make up some of the lost ground. For sure, we have a lot more to do tomorrow but I am confident we can do well.”

The Hyundai Shell World Rally Team has once again set expectations to finish the rally with all three Hyundai i20 WRC cars, carrying out its learning in the competitive WRC environment. The team has therefore gathered plenty of useful information about the performance of the car in today’s stages, which it will carry over to tomorrow. Saturday’s schedule will comprise seven stages over a total of 125.5km, plenty of opportunities for the team to continue learning and improving.

Team Principal Michel Nandan said: “The first day of the rally is always a huge learning curve for us in our first season, and today’s stages were no exception. We are pleased to have Dani and Bryan back with us alongside Thierry but the three crews have all experienced mixed fortunes today. Thierry had a broken turbo towards the end of SS2 which left him with power loss right up to lunchtime service. The team worked very professionally and quickly to fix the problem, which we have to look into more deeply. He was back on the pace in the afternoon but with a lot of time lost. Dani has had a good day to be fourth overall after a largely trouble-free day. Bryan, too, has made progress during the day and gained momentum in the afternoon loop. We will use today’s experience to improve the Hyundai i20 WRC for tomorrow’s stages, and I am sure the drivers too will be looking to find a strong rhythm in all stages.”