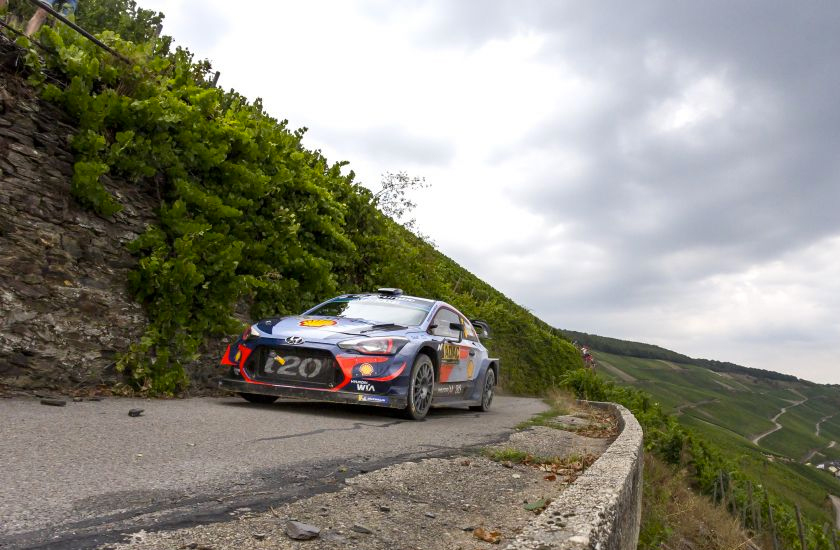 We have taken a deliberately cautious approach to the start of our home event, Rallye Deutschland, with our efforts focused on securing as many points as possible for our championship campaign.

Leading the drivers’ championship, it has been a sensible, risk-free strategy for our Belgians Thierry and Nicolas, as they hold third place and a provisional podium after the first seven stages.

“We have done all we could with no real mistakes,” said Thierry. “It has been difficult to match the times of Ott and Seb, but we are in the podium fight, which is good. I am not in the mood to take big risks.”

The ninth round of the season heralds a return to tarmac for the first time since April’s Tour de Corse, where we struggled for pace. Since then, we have carried out important tests with our i20 Coupe WRC.

“We have made some improvements in our tarmac performance,” said our Team Principal Michel, “but we are still missing pace to some of our rivals. We have to avoid the temptation to take unnecessary risks.”

Close encounters of the home kind

Returning for their first WRC event since Rally de Portugal in May, Dani and Carlos are involved in a close battle for fourth.

“It has been a difficult start to the rally for us,” admitted Dani. “We have suffered with understeer and just haven’t been able to get into the required rhythm. We will continue to do what we can.”

Similarly, Andreas and Anders had a tough Friday and hold ninth overall. The Norwegians found improved pace in the afternoon loop.

“We worked hard on adapting my driving style as well as making some adjustments to the car,” said Andreas. “We looked closely at the situation at service, and my engineer did a great job. I hope we can continue in this way for the remainder of the weekend.”