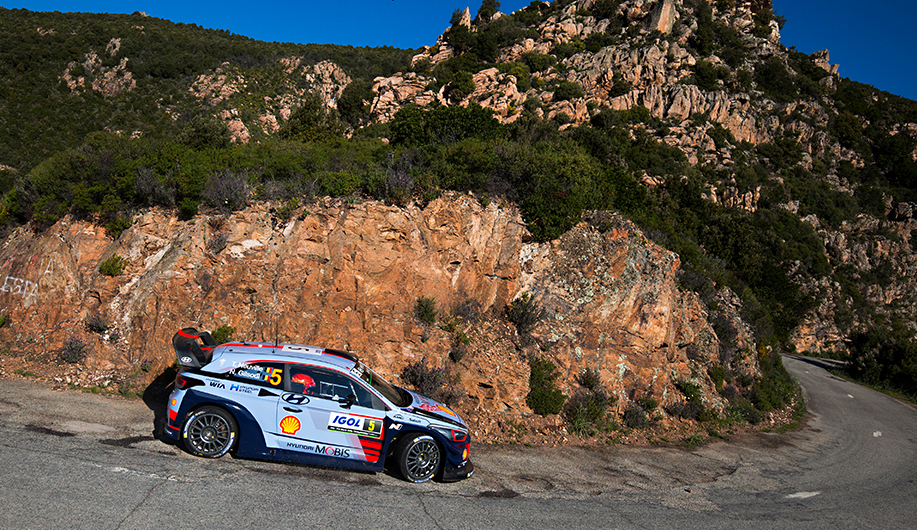 The sun shone down on our crews during the opening stages of the 2017 Tour de Corse, and things are certainly heating up on the overall classification.

Competition is closely fought on the tight and twisty tarmac terrain but we’ve established our podium credentials on day one.

Friday’s itinerary included just four stages run over an impressive total distance of 120.64km. The 31.20km Pietrosella  Albitreccia and 29.12km Plage du Liamone  Sarrola  Carcopino stages were both run twice, with only a remote tyre fitting zone in between.

With no lunchtime service, it was an unforgiving opening to the classic Corsican event. Thankfully, our crews all made it through safely.

Picking up the pace

Thierry and Nicolas continued where they left off in Mexico to set a string of top-three stage times. Our Belgian crew, who scored second in Corsica just six months ago, ended the first day in third overall.

“Everyone seems to be on strong pace here this weekend, which will make it a nice fight,” said Thierry. “We were certainly on the limit, so we’ll have to see what improvements we can make to help us reduce the gap.”

As the first tarmac rally of the WRC season Corsica was always going to be a valuable learning experience with our new car. There is still pace to find but it’s been a satisfactory start.

“Steady but not spectacular” is how our Team Principal Michel summarised the day. “We know what we are capable of, and I am hopeful we can unlock some more performance.”

Dani and Marc set consistent pace during Friday’s two loops. Our Spaniards are involved in a close battle for fourth along with Craig Breen.

Dani hopes to recover some ground on Saturday. “We are missing some speed compared to our rivals,” he said. “It’s difficult to put our finger on what is exactly missing because the car feels quick. I have felt very comfortable with my driving. I am sure there are more things we can try.”

Our Kiwis Hayden and John got their Tour de Corse off to a cautious start. “The first stage was tricky with some damp patches that did nothing whatsoever for the confidence,” said Hayden. “Our driving has not felt bad but we’ve not been producing times. We want more than P7 and Saturday is a big day. All is not lost yet.”

Saturday’s schedule includes four stages; the 48.71km La Porta  Valle di Rostino gets things underway before the shorter 17.27km Novella. The loop will be repeated in the afternoon following lunchtime service. A total of 131.96km of stages makes it the longest day of the rally with opportunities to gain  or lose.

Michel concluded: “Over the next two days, we have some really long and demanding stages  including a 49km tomorrow and a 54km on Sunday. We need to be careful and stay out of trouble. There might only be six stages to run, but we can’t underestimate the challenges that remain.”