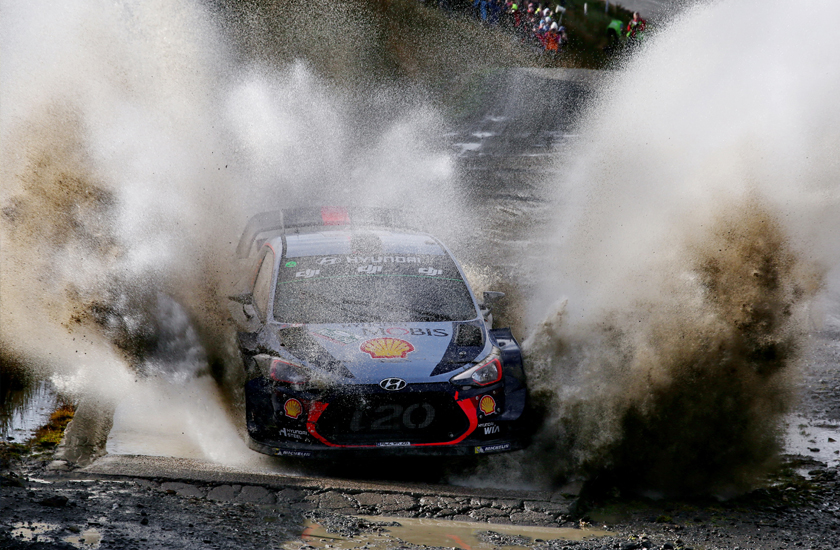 The penultimate round of the 2017 WRC season has begun on the tricky and slippery forest roads for which Wales Rally GB is renowned.

Despite dry weather, Friday’s six stages offered crews a tough challenge with changeable grip levels and no luxury of a lunchtime service.

For Thierry and Nicolas, a ten-second penalty on Thursday evening put them at an immediate disadvantage. However, our Belgians fought back in style with a stage win in the day’s final test moving them up to fourth overall.

“The pace is there and we would have liked to be fighting at the top but the penalty put us behind before we’d even really started,” commented Thierry. “Finishing the day with a stage win is encouraging and gives us the motivation we need to keep pushing on Saturday.”

Four in the fight

Running four i20 Coupe WRC cars for the first time this season, we have a comprehensive and versatile line-up.

“The team has worked incredibly hard to allow us to run four crews in Wales,” commented our Team Principal Michel. “All four crews have faced some challenges on Friday. They will be trying to find more pace and performance as the rally unfolds. All the lessons we are learning this weekend will serve us well for 2018.”

Andreas and Anders, returning for their second WRC event with our team, were joined by the returning pair of Hayden and Seb, with Dani and Marc in the #16 fourth car.

“It is always a pleasure to come back to Wales,” said Andreas. “From our road position, there hasn’t been much more we could do. We are still learning about the car in gravel conditions, and doing all we can to adapt and learn. We hope to make up a few more positions on the way.”

Chained to the rhythm

After missing Rally de España, Hayden and Seb were looking to get quickly back into a rhythm on a surface where they know they can perform well.

Hayden said: “Wales Rally GB has certain particularities that you need to deliver against in order to be quick. You need absolutely bags of confidence and to be completely comfortable in the car. We always seem to struggle with understeer on the opening day, so we were mentally prepared for that, but it held us back today.”

Dani also struggled to acclimatise to the conditions. “The morning stages were a lot more slippery than I anticipated, which caught us off guard a bit,” he said. “The stages were really fast at times, and I remain hopeful that we can make up some ground over the next two days.”

Saturday’s itinerary takes in nine stages, including the short Cholmondeley Castle test near Chester, England. The remaining four stages, each run twice, makes up a total competitive distance of 142.38km.