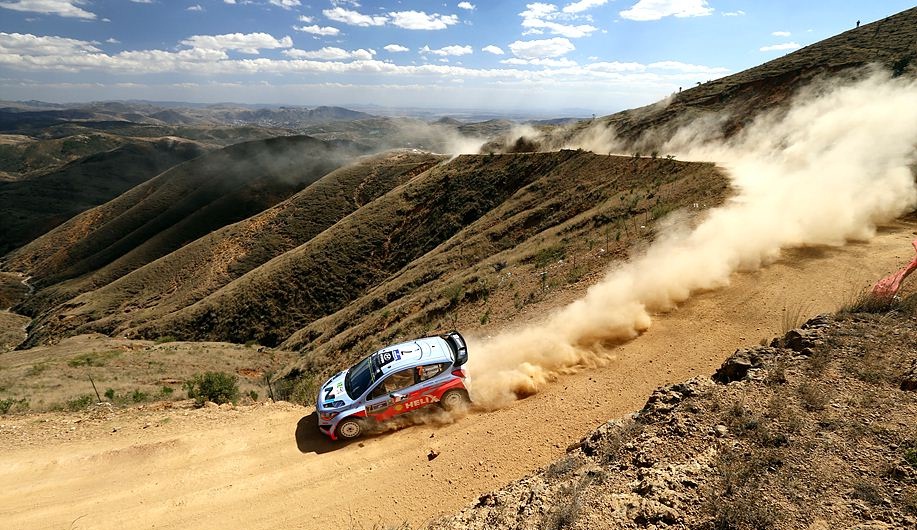 Neuville (#7 Hyundai i20 WRC, co-driver Nicolas Gilsoul) found confidence and pace in the afternoon loop to claim fifth position after 11 of the event’s 22 stages, only 1.5 seconds from fourth place

Atkinson (#8 Hyundai i20 WRC, co-driver Stéphane Prévot) got off to a troubled start from Thursday’s opening stage but is back in the game at the end of Friday to lie in the top ten.

The Hyundai Shell World Rally Team has encountered a difficult start to just its third event in the FIA World Rally Championship (WRC) with both drivers Thierry Neuville and Chris Atkinson struggling to acclimatise to the tough gravel terrain of Rally Mexico.

Both drivers ran into trouble on the opening loop of Friday’s stages but set-up changes for Neuville during lunchtime service and repairs to Atkinson’s car for the afternoon’s repeat loop have helped the duo make up ground as the action heads into the penultimate day on Saturday.

Neuville was not totally confident with the handling of his #7 Hyundai i20 WRC in this morning’s four stages  Los Mexicanos 1 (9.85km), El Chocolate 1 (44.03km), Las Minas 1 (15.59km) and Parque Gto Bicentario 1 (2.60km)  but the team made important changes to the car’s set-up over the lunchtime service in León, which enabled him to find form in the afternoon loop.

Neuville said: “It wasn’t the easiest of mornings as I wasn’t 100% confident with the car. I focused on improving the set-up and to find something that works for me in these high altitude gravel conditions and we made some key changes over lunch. That helped a lot in the afternoon as I found some improvements in stage times and overall performance. I have been generally satisfied with my performance today and to be fifth after a hard day is not too bad. We have to remember that although we have tried to simulate the altitude of Mexico in testing, there is no substitute for actual competition and although it has been a character building day, we have learned a lot.”

Atkinson, competing in his first WRC event for a year alongside co-driver Stéphane Prévot, was at a disadvantage from the very opening stage, the short Street Stage in Guanajuato on Thursday, when his Hyundai i20 WRC developed a software bug that forced him to reset the car just 60m into the stage. The time deficit of 24 seconds left him right down the classification even before the start of Friday’s action. More issues occurred in the first stage this morning, SS2 Los Mexicanos 1, when he had an Anti-Lag System failure, which necessitated the stage to be run in ‘road section mode’. The duo then sustained damage to rear suspension in SS4 (Las Minas 1) which required a cautious approach to the rest of that stage and SS5. All in all, it was a challenging start for the Australian, but his fortunes started to change in the afternoon loop as he improved his position to end Friday eighth overall.

Atkinson said: “It’s certainly been an interesting event so far and we’ve had a few issues that have cost us a lot of time. On the first stage this morning we had a problem with the Anti-Lag System so we had to run the stage in road section mode, which held us back in the stage classification. On SS4, after a long left corner we felt something was loose in the rear right of the car which turned out to be damaged suspension. We had to slow down to make sure we would get the car back to service. We kept pushing and this afternoon we made some encouraging progress. We can build on this tomorrow and keep clawing back the lost time but, most importantly, continuing to learn as much as we can.”

In its third WRC event, the Hyundai Shell World Rally Team is tackling the might of the Mexican gravel and notorious challenge of altitude for the first time. Almost 150km of stages today has given the team one of its sternest tests yet but it is precisely what the young team expects from the rigours of the World Rally Championship.

Team Principal Michel Nandan said: “It has been a difficult rally for us so far with a very long day today  a total of 148km over ten stages – and even more to come tomorrow. I am satisfied that we have reached the end of a tough day with both cars still competing and in the top ten overall. We suffered a number of technical issues with Chris in the first loop this morning which is not ideal in his first rally in over a year. He did well to bring the car to lunchtime service. Thierry also had a hard start but we made some adjustments over lunch and both drivers had a much better afternoon. Their stage times respective to the leaders were improved and we had a generally trouble-free afternoon. We made the choice not to practice in Mexico prior to this event and although we did some altitude simulation in Spain, there is no better test than in actual rally conditions. Although it’s hard, we are pleased to be here and doing our learning in a competitive environment. Tomorrow won’t be an easy day but we will continue to push.”