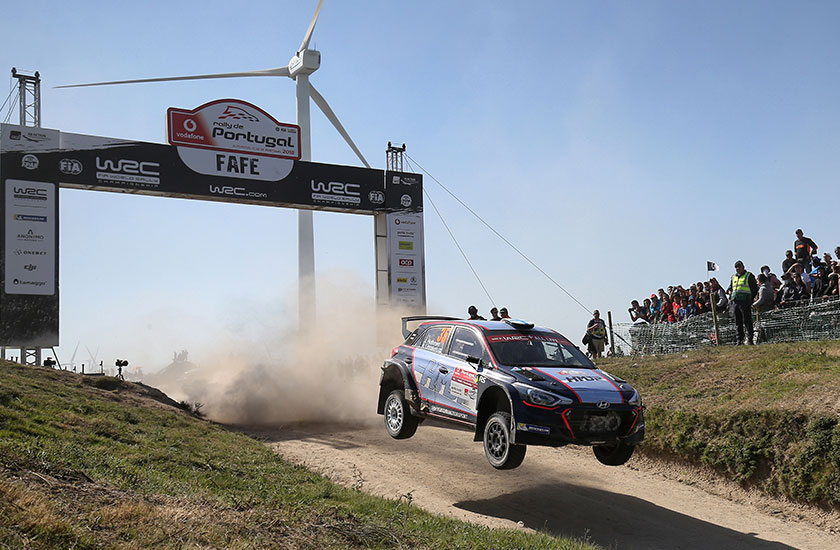 Our Finnish duo Jari and Antti set an impressive pace on the final morning of Rally de Portugal, right on the pace of the WRC2 leaders. It was an encouraging end to their third WRC2 event of the season so far, having experienced issues earlier in the weekend.

The HMDP pairing returned to the Hyundai i20 R5 following their top-six finishes in Sweden and Mexico earlier this season. Tackling a tricky 20-stage Portugal itinerary, there was plenty of action and drama right for all crews from the outset.

Jari got off to a difficult start on the first stage on Friday (SS2 Viana do Castelo), suffering a puncture. He was soon up to speed and starting to gain confidence before another tyre-related issue in SS5, the repeat of the same stage. Despite pushing through, he then endured a more terminal problem in SS6 when hitting a rock, which sent the #35 car into a ditch.

Getting back on track

Re-joining under Rally 2 on Saturday, our Finnish duo set about picking up their pace. Fourth place on the afternoon loop showed the progress they were making.

With the iconic Fafe stage looming on the final morning, it was a final chance for Jari and Antti to show their determination. Finding good pace immediately, they claimed four top-four times, including the Power Stage.

“It has been an important learning curve for me and Antti this weekend with several difficult moments, some very tough stages as well as some signs of promise,” said Jari. “We didn’t get off to the best start but we re-focused on building our confidence and aiming to finish the rally with no further issues.”

He continued: “Sunday morning showed our true potential and it was nice to be battling near the front of the WRC2 with some strong runs and good speed. I especially enjoyed the Fafe stage with an amazing crowd of spectators. It has been a hard, but rewarding weekend.”

Our Team Manager Alain Penasse added: “In a rally where so many competitors faced difficulties, it is a testament to Jari and Antti that they continued to battle no matter what issues they had. Portugal has offered another valuable experience.”

Jari and Antti will return to their i20 R5 at their home event, Rally Finland, in July.