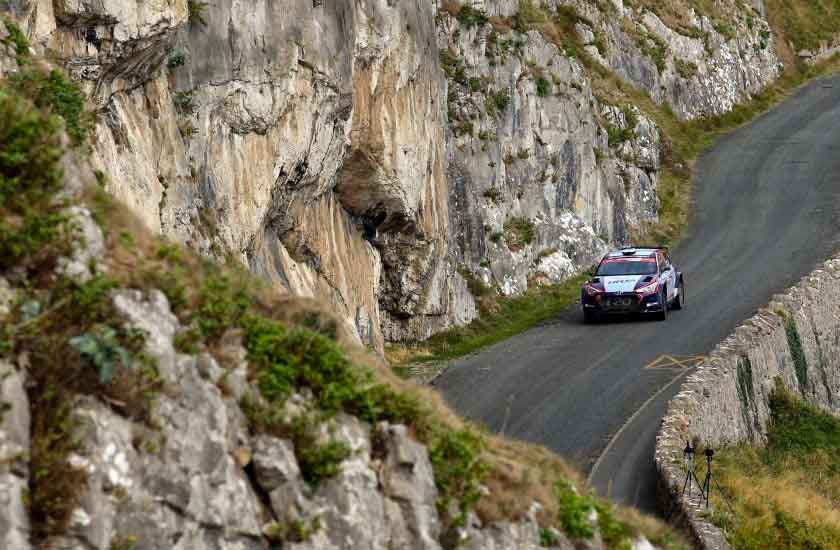 Our HMDP crew, Jari and Antti, enjoyed a fantastic final morning in Wales Rally GB, taking a stage win to finish the tricky event in a fine fourth place in the competitive WRC 2 class.

In their sixth WRC 2 participation of the season, our Finnish crew scored an impressive 15 top-five stage times, twelve months after they last competed in Wales.

Their performance not only demonstrates the year-on-year improvement as a crew but also the competitiveness of our i20 R5 against strong opposition.

“Jari and Antti have done a fantastic job,” said our Team Manager Alain. “A year on from their Welsh debut in the i20 R5, we knew this rally would be a representative gauge of their progress. They have shown real maturity and professionalism.”

Wales Rally GB got underway with the short 1.7km Tir Prince stage on Thursday evening before a more representative day of action on Friday. Conditions were typical of the popular rally with rain and mud creating slippery, demanding stages.

Aside from a puncture in SS4 (Penmachno) and a spin, it was a decent start to the event for Jari, ending the opening day in fifth place.

With no lunchtime service, and 150km of stages to contest, Saturday was a valuable learning experience for the HMDP pair. They were consistently on the pace throughout the day to move up to fourth in WRC 2 with a comfortable margin.

Reducing the gap to the podium on Sunday, Jari was second in SS19 (Elsi), third in the SS20 Power Stage (Gwydir) and then scored a stage win in SS23 (Great Orme Llandudno). It was their third stage win of the season and first since Rally Sweden back in February.

“We have had a good weekend in Wales Rally GB, and I am pleased with our fourth place,” said Jari. “Friday was a long and quite difficult day with the puncture, but we had a much better Saturday and Sunday. We have built up a good rhythm over the three days with some key set-up improvements, which has allowed us to get the best out of ourselves. I am pleased with the speed we’ve shown and the development we have made from last year’s performance to this year.”

Jari and Antti will return to the i20 R5 at Rally RACC Catalunya – Rally de España from October 25-28.

2018 FIA WRC 2 Championship for Drivers’ Standings
After round 11