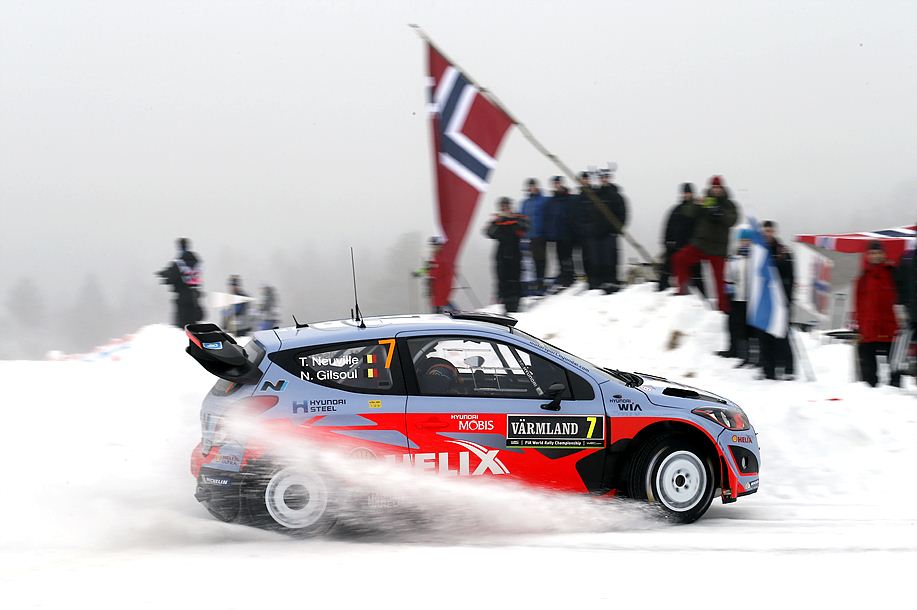 A total of 126.44km special stages have been run today with a repeat loop of four stages run in reverse, taking in treacherous wintry conditions in Sweden and Norway, and culminating in a repeat of the exciting Super Special Stage in Karlstad. A stage win and a top-two position overall heading into the penultimate day of the rally tomorrow bring to an end a satisfactory day for Hyundai Motorsport.

Thierry Neuville (#7 Hyundai i20 WRC), alongside co-driver Nicolas Gilsoul, have been one of the standout crews of the day with a consistent run of competitive stages in which they have never been out of the top six. Finding conditions more favourable during the repeated afternoon stages, the Belgian duo made further improvements and topped the timesheets in SS9 (Torsby 2  14.76km), the team’s first SS win of 2015 in a dramatic stage that saw the #7 crew move up into second overall in the standings.

Neuville said: “It has been a good day overall and we have definitely shown some encouraging pace. The morning started off quite tricky and it was difficult to estimate the grip levels. I took it cautiously because it was just the start of the rally. The conditions in the afternoon loop were more equal and we were able to show our true potential. In SS9, it started to get dark, which made it difficult we had a few very nice corners and took our first stage win of the season. We start tomorrow from second overall, although we know there are more challenges to come.”

In his first event with Hyundai Motorsport in 2015, Hayden Paddon (#8 Hyundai i20 WRC) and his co-driver John Kennard, made steady progress throughout the day, as the Kiwi adapted his driving style to get the most out of the Hyundai i20 WRC. The benefits of his approach were clear as he gained time on the repeated stages. A top-six time in SS9 elevated him to sixth overall.

Paddon said: “It’s great to be back in action; the break was long and it was good to blow away some cobwebs. It hasn’t been the easiest of days, though, with some demanding conditions. This morning’s loop was about understanding where the grip levels were and I felt, at times, that I was a bit cautious. With the benefit of hindsight, we knew for the repeat stages where we could use the snow banks to our advantage and that definitely helped. I had to adapt my driving style for the afternoon to get the best out of the car and I think some of the stage times reflected that. We’re sixth overall for now but there’s a long way to go.”

Kevin Abbring (#20 Hyundai i20 WRC), taking part in his first ever rally with WRC machinery, was happy with his first full day of competition in the #20 car. He was unfortunate to hit trouble in the day’s opening stage (SS2  Torsby 1  14.76km) after losing 1m30s after his glasses steamed up, causing him to get caught out by the snow. He quickly regained his composure and built up his confidence behind the wheel to set a string of top ten stage times in the afternoon. Despite his early time loss, he finishes Friday just outside of the top ten positions.

Abbring said: “What a great day and what a way to end it in front of all the spectators at the Super Special! My first day of stages in a WRC car has been an amazing experience and I’ve had a lot of fun. The day didn’t really start out as I had hoped after my glasses became fogged up towards the end of the opening stage. I couldn’t see much and I ended up onto the soft snow which then pulled me in. We lost a lot of time but we put it quickly behind us and built up confidence as the day progressed. The repeat stages were much better and I feel that we had some good pace and we learned a lot. The main thing has been to get more rhythm out of the pace notes, which will benefit us in the future. I’m looking forward to more tomorrow!”

The Hyundai Motorsport team has coped well with the logistical challenges posed by Rally Sweden with competitive action today across two countries, including a remote tyre fitting in Kirkenær (Norway), a Super Special stage in Karlstad and the usual services in Hagfors. The work of the team, and the performances of all three car crews today, is an ideal showcase for the improvements made by the Hyundai Motorsport compared to their debut Swedish rally twelve months ago.

Team Principal Michel Nandan commented: “The entire team can be pleased with this first full day of Rally Sweden. We have shown a real improvement here compared to last year. The fact that we have Thierry in second place, Hayden in the top six and Kevin knocking on the door of the top ten at the end of a tough day is very encouraging. Conditions have been unpredictable at times so the drivers have all acquitted themselves very well. Thierry has scored our first stage win of the year, which was nice to see, while Hayden and Kevin have got their 2015 seasons off to a good start. Rally Sweden is full of the unexpected, as we have seen today, so we must continue to work hard tomorrow and continue in the same way we have started.”