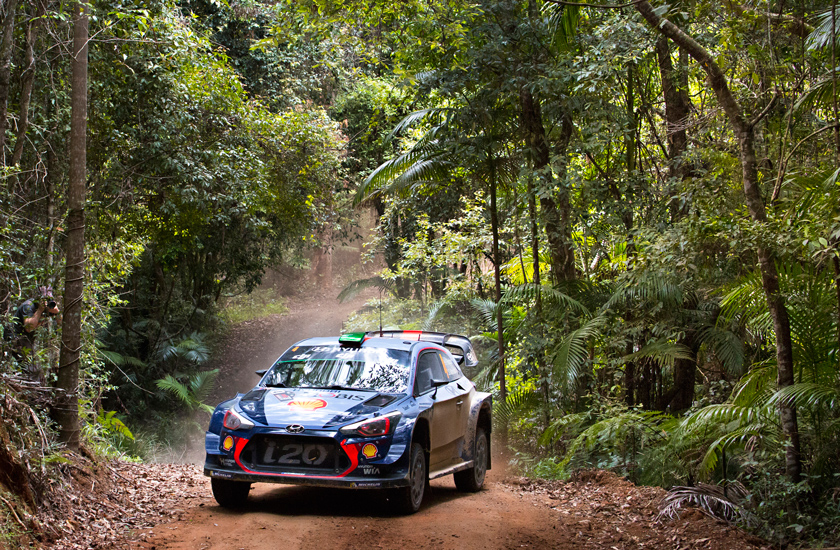 The final round of the 2017 WRC season has begun in spectacular style as we find ourselves leading Rally Australia with a 1-2 at the end of the opening day of action.

Our Norwegian duo Andreas and Anders, who won in Australia twelve months ago, took five stage wins to build up a lead of over 20 seconds.

Right behind them on the classification are Thierry and Nicolas, who claimed three wins of their own on Friday afternoon. It is the first time in our history that we have taken a clean sweep of stage wins on an individual day, and sets us up strongly for a victory push.

Our Team Principal Michel, however, urges some caution at this early stage of the weekend: “We’ve been in similar positions before, where we’ve led at the end of Friday, so we know we cannot get complacent,” he said.

Andreas and Anders were quick from the very start of Friday’s itinerary, which covered a repeated loop of three tests – Pilbara (9.71km), Eastbank (19.05km) and Sherwood (26.68km)  as well as two runs through the 1.27km Destination NSW Super Special Stage.

“It has been a very good start, bringing back memories from our win last season,” said Andreas. “I had a clean drive throughout the day with no mistakes and with an incredibly positive feeling from inside the car. It really felt like home!”

Thierry and Nicolas, starting second on the dusty gravel roads on Friday, were at a disadvantage. They persevered and were rewarded with a trio of stage wins, making it a maximum eight for our team on Friday.

“We have had a promising first day,” summarised Thierry. “The conditions on the stages were quite tricky with lots of loose gravel, which meant a bit of cleaning for those earlier on the roads. It’s a very close battle. We want to aim for victory ourselves this weekend.”

With huge support of the travelling contingent of Kiwi fans, Hayden and his British co-driver Seb had a lacklustre day.

“Not the start we had wanted,” admitted Hayden. “So far, things haven’t quite clicked. We will look through the data to see if there’s anything we can find to improve. stages. This is an event where I feel very comfortable usually, so we will keep pushing.”

Saturday’s itinerary includes one of the longest stages of the entire season  the 48.89km Nambucca17 test  run at the early time of 7.18am. It will be a proper wake-up call for all teams, and potentially a rally-decider.

The morning loop will continue onto the 20.87km Newry17 and 1.37km Raceway Super Special. Stages are rejigged in the afternoon with Welshs Creek (33.49km) and Argents Hill (12.24km) followed by the repeat of Newry17.

The action concludes, as it did on Friday, with two runs of the 1.27km Destination NSW Super Special  a full-on day covering 140.27km of stage distance.