Day 1: Thierry and Hayden on podium charge in Australia 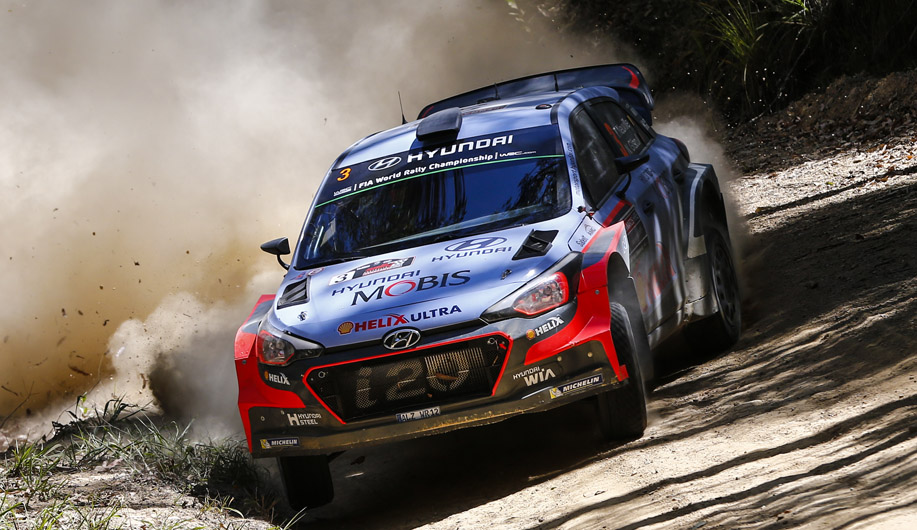 Day 1: Thierry and Hayden on podium charge in Australia

At the end of the first day in Australia, all three of our crews find themselves inside the top-seven, as the battle for second place in the Drivers’ Championship intensifies.

Heading into the final showdown of the season, Thierry held the Championship’s runner-up position with a 14-point advantage over his closest rival, Andreas Mikkelsen. However, he was also facing competition from his colleagues Hayden and Dani, who both still have a mathematical chance of claiming the position.

Thierry helped his cause with a fantastic stage win in SS7 (Bakers Creek 2) alongside co-driver Nicolas. This was quickly followed by two second-place times that saw the pairing rise to third place overall, just 22.5s off leader Mikkelsen.

“The afternoon loop went well, and we could set some fast times, which moved us up the classification” said Thierry. “Andreas is doing well, and leading the rally, so we know we have to maintain our speed and rhythm in our fight for second in the Championship!”

A strong Friday display from Hayden means that he finds himself just 1.2s behind his teammate Thierry. Together with co-driver John, the Kiwi had the brightest start of all our crews, taking a stage win in SS2 (Bakers Creek 1). Despite losing time at the end of the morning loop, they remain firmly in contention for a podium ‘down under’.

“All in all, I’m pretty satisfied with how this opening day has gone,” said Hayden. “The only real disappointment was the fourth stage, which didn’t go to plan. The afternoon went without any real dramas, and I think we’re well placed for the rest of the rally. I’m feeling quite relaxed and confident.”

However, for Dani and Marc, a positive start to the rally was undone by a 20-second time penalty handed to them for a late check-in to stage SS4. Consequently, our Spanish crew dropped from their podium position. By the end of the day, they found themselves seventh overall, just 11.4 seconds off the top-five.

Reflecting on Friday’s action, Dani said: “We started well and were in the fight after the opening three stages, but we misjudged the time we had to make it to SS4. The time penalty has cost us 20 seconds. These things can happen; we are only human. But it’s still immensely frustrating. There’s a long way to go in this rally and we’ll keep pushing.”

Thanks to Hayden and Thierry’s stage wins today, we have now taken at least one stage win in each of the thirteen rounds this season. However, despite already securing second place in the Manufacturer’s Championship, we are still pushing for an impressive performance in Australia, as we look to secure our first-ever Australian podium.

Our Team Principal, Michel, summarised: “Even though it’s the final rally of the season, we can’t afford to relax. Thierry and Hayden are in strong positions and it was good to add some more stage wins to our total. The Drivers’ Championship is intense, and it’s great to see all three of our crews taking it down to the wire!”