Success at the Nürburgring 24 Hours

Celebrating a class win and podium 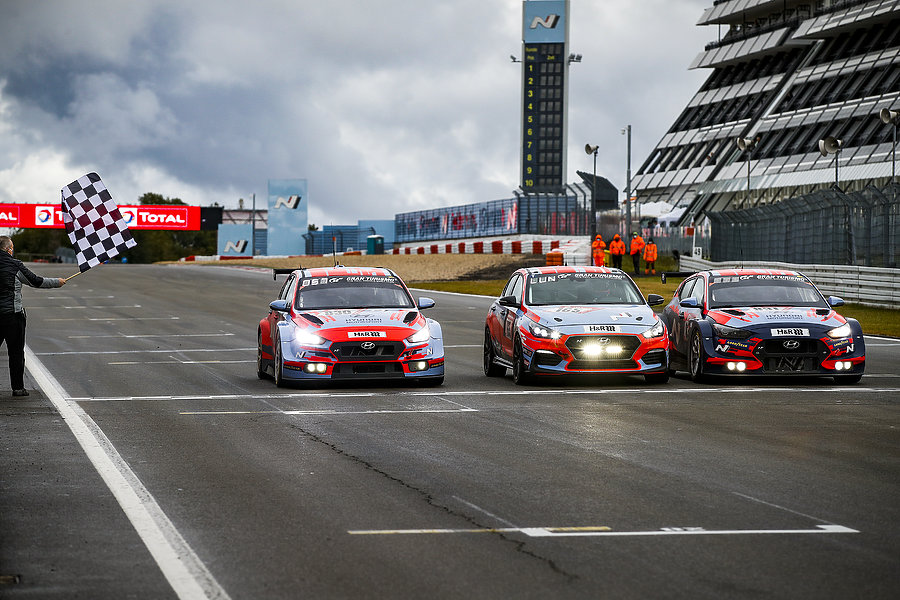 Celebrating a class win and podium

In a typically unpredictable and challenging edition of the Nürburgring 24 Hours, our team has battled the elements to score a TCR class podium. The Veloster N TCR team of Marc Basseng, Manuel Lauck, Moritz Oestreich and Peter Terting finished second, with our i30 N TCR team of Lauck, Antti Buri, Luca Engstler and Hari Proczyk crossing the line in fourth.

In the SP3T class, Hyundai Team Engstler secured a superb victory with the i30 Fastback N.

The start of the race featured our Hyundai Motorsport N cars in first and second in class, and they continued to lead in the opening hours on Saturday afternoon. Unfortunately, minor technical problems dropped both cars down the order, starting a chase that would last until the final lap.

Lauck was able to briefly regain the lead in the Veloster N TCR, before a recurrence of the earlier technical issue. The team’s task was further complicated when organisers were forced to red-flag the race after seven hours due to heavy rain and fog. Not only did the drivers face less time to make up the deficit, but the Veloster N TCR fell a lap behind the class leader.

Mounting a comeback
Racing resumed at 08:00 on Sunday morning, and soon after Terting was able to put the Veloster N TCR back on the same lap as the leader. The gap was brought down to under four minutes as conditions improved, and Oestrich was able to set the fastest lap for the class. However, the return of wet weather prevented the team from making any further gains.

The i30 N TCR’s challenge faced a setback with a black flag for exceeding noise limits on Saturday evening. During the red flag, the team was able to remedy the issue and prepare the car for the restart, with the crew showing great pace in the final hours of the race.

Our Team Principal Andrea said: “The Nürburgring 24 Hours has been an incredibly tough race, and again we finish with one of our cars on the TCR class podium. It is frustrating the Veloster N TCR lost a lap because of the red flag. However, the strength of the chassis we offer to customers, the pace of the drivers and the quality of the team showed in the time we were able to make up. Sadly we were not able to close the final part of the gap, and take the result we wanted.”

Class win for i30 Fastback N
The third Hyundai crew on the grid celebrated a well-deserved class win in SP3T. Though they were competing against more powerful cars, drivers Marc Ehret, Kai Jordan and Markus Lungstrass led the class throughout the race in the Hyundai Team Engstler-run i30 Fastback N. They had built up a four lap advantage when they took the chequered flag, flanked by our two TCR cars.

Andrea concluded: “The performance of Hyundai Team Engstler was superb. In class where they were up against more powerful machinery, they truly dominated. I think everyone involved can be proud of the result – it was a great showcase of the capabilities of the i30 Fastback N, and the N range as a whole.”