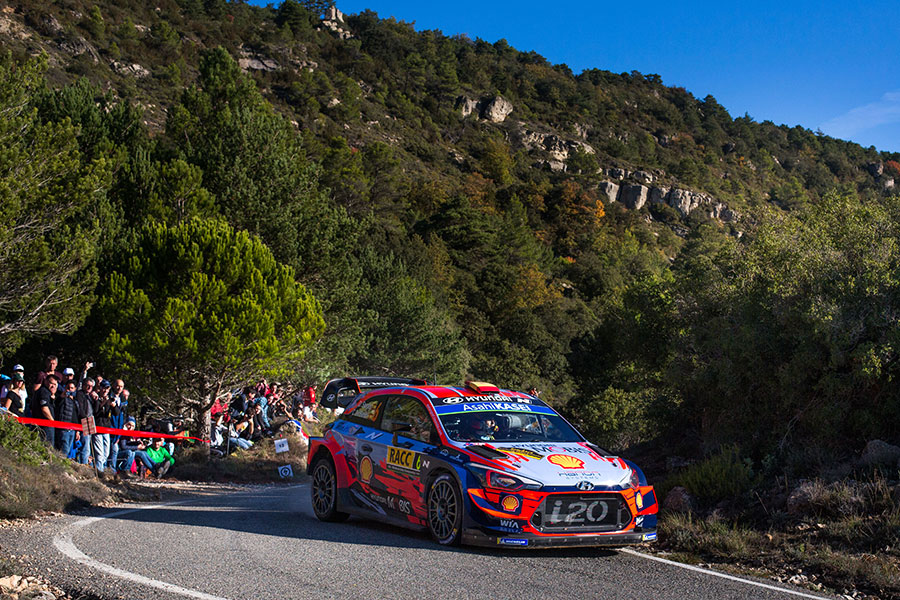 Fresh from our recent double podium finish in Finland, we travel to the penultimate round of the 2021 WRC season, Rally de España, aiming for another strong performance.

“Following our best result at a rally that has historically been one of our weakest, the entire team is re-energised and ready to tackle Rally de España,” said our Team Principal Andrea. “With only two rounds of the season remaining, we want to finish the year with our strongest performances as we bid farewell to this era of WRC.”

Proven performances
At the previous edition of Rally de España, held in 2019, Thierry triumphed in his i20 Coupe WRC on mixed terrain stages, while Dani finished in third. The double podium would prove decisive in that season’s championship battle, extending our advantage at the top of the standings.

After its absence from the 2020 calendar, the Salou-based event returns with a change in challenge, reverting to a full tarmac profile for the first time since 2009. We showed great pace at the most recent tarmac rally, Ypres Rally Belgium, where we secured an impressive 1-2 finish.

“We have shown we can be competitive on tarmac with our strong result in Belgium, so we have set ourselves the highest benchmark,” commented Andrea. “The 2019 podium in Spain featured Thierry, Ott, and Dani, so they all know what it takes to be fast on these roads.”

Inside the helmet
We will field three crews in the 17-stage rally: Thierry/Martijn, Ott/Martin and Dani/Cándido.

Having previously won at Rally de España, as well as taking victory at the last tarmac event of the season, Thierry is ready for the challenge.

“When I first participated in Rally de España it was a full tarmac event and now we are back to that profile after a few years of mixed terrain,” said Thierry. “It is a rally I like; the nice flowing roads are really good fun to drive with these WRC cars.”

Following a run of good form, Ott is also hoping for a strong performance on the Spanish tarmac.

“It is a very fast event and one that I really enjoy,” said Ott. “After two consecutive podium finishes, it would be nice to secure a hat-trick in Spain as we aim for a strong finish to this season.”

A home event for both Dani and Cándido, the Spaniards are looking forward to competing together in their native country.

“I am really happy to be back driving in Spain after two years without a rally in my home country,” said Dani. “I’m hoping the weather will be nice and that we will have a lot of fans there as well. I can’t wait to be back at Rally de España.”

Flying Finns
Jari Huttunen and his co-driver Mikko Lukka secured a class podium with our i20 N Rally2 at their home event – marking Jari’s third top-three result at Rally Finland. The Finnish crew will be looking to replicate its winning performance from Ypres Rally Belgium as WRC2 returns to tarmac.

“I’m looking forward to the return of tarmac next weekend after our victory in Belgium,” said Jari. “The target is to perform well from the very first stage.”

Joining them will be compatriots Teemu Suninen and Mikko Markkula in their first outing with our team. The crew will be looking to leverage its previous experience of Rally de España, which includes a WRC2 victory in 2017.

“Spain has been one of my all-time favourite rallies,” said Teemu. “I’m looking forward to competing there with the Hyundai i20 N Rally2.”

“We have learned a great deal about the car in its first events, which should put us in a great position for a successful weekend in Salou,” added Andrea. “We wish both crews the best of luck.”