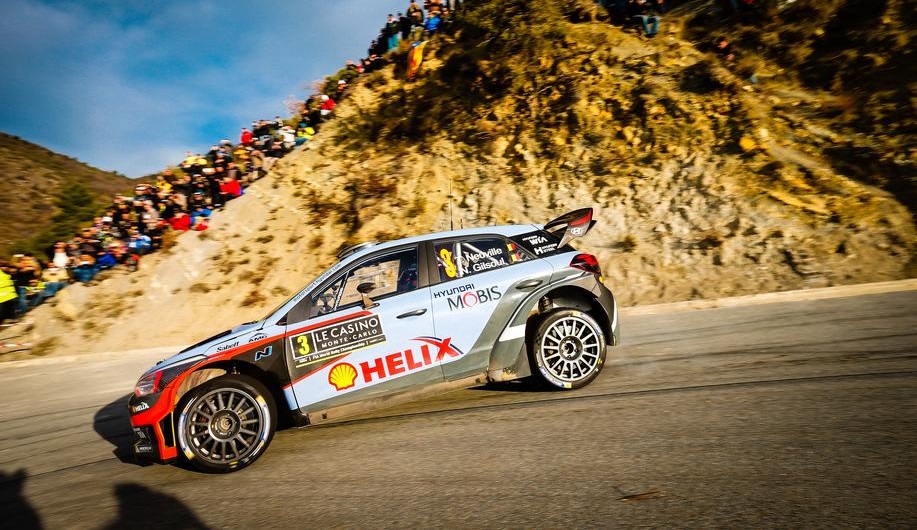 January 24, 2016  We have made a great start to the 2016 season with our drivers taking the New Generation i20 WRC to stage wins and a first podium finish at Rallye Monte-Carlo.

Following from yesterday’s spectacular 1-2-3 stage result, our aim was to secure the podium for Thierry as well as the sixth placed finish for Dani.

Thierry steered the new car to third place overall after a competitive weekend despite battling transmission problems in the final morning. Dani had a great finish to the event with second place in each of today’s three stages to secure sixth overall and two extra points on the Power Stage.

This performance sees us at the top of the Manufacturers’ Championship on the same number of points as VW!

Thierry was delighted to take his sixth podium for Hyundai Motorsport and celebrated with the team after nursing the car back to Monaco service.

“That was a nerve-wracking end to our Monte-Carlo rally,” said the Belgian. “We started to experience transmission problems before the Power Stage, which meant we were running 2WD only. It wasn’t easy but we only lost one minute of time so our podium was safe  that was the objective all morning! We can be very pleased with our weekend. The New Generation i20 WRC has shown its potential and it’s good to be back on the podium, particularly after the difficulties we had at the end of last season. To register the first stage wins and now first podium with the new car is a great feeling and this result is for the whole team.”

Dani put his early struggles behind him with a string of second-place stage times and ended this year’s Monte-Carlo in sixth place overall.

“We can all be pleased with the final result,” commented the Spaniard. “It’s great for the entire team to have two New Generation i20 WRCs in the top-six and to see Thierry on the podium. Well done to him and Nicolas. From my point of view, the start of the weekend was not very easy and I struggled to find confidence in the car. Working with the team, we have improved the car from one loop of stages to the next and we could already see yesterday that we were heading in a good direction. I was very happy with the balance this morning and could set some good times, which have shown the performance potential of the car. We must continue working in this way but this result is a nice start to the season.”

Hayden had a tough introduction to Monte-Carlo’s famously tricky stages but performed well and gained valuable experience while setting a number of top-six stage times. He suffered a problem with the differential in today’s Power Stage but was able to finish on his first appearance at this historic event.

“It has been a positive, character-building weekend for me,” admitted the Kiwi. “We knew coming to Monte for the first time would be tough, and we approached the event realising we had lots to learn. Some stages were harder than others, but I have thoroughly enjoyed tackling Monte’s iconic stages and we were able to have some fun along the way. We’ve learned a lot and this morning’s final stages were a continuation of our learning curve. We broke something in the driveshaft under braking in one of the hairpins during the Power Stage, which slowed us down, but even that can’t take away from the encouraging weekend. For the team, it is great to see the new car on the podium in its first event, and I can’t wait to get behind the wheel of the New Generation i20 WRC in Sweden.”

Our team leaves Monte-Carlo with confidence after a welcome result. We will continue trying to improve on our 2015 achievements when we head to Rally Sweden in February, as we believe there is more to come in from the new car.

“We are all delighted to see the New Generation i20 WRC finish on the podium here in Monte-Carlo,” said Team Principal Michel Nandan. “It’s an important result for the entire team and it is the culmination of a lot of work from our colleagues in Alzenau. Thierry has had a competitive and consistent weekend, and it’s really fantastic to see him back where he belongs – on the podium. Dani made big improvements over the weekend and he had a positive morning, including scoring Power Stage points. Hayden did everything that was expected from him – and he can now tick Monte-Carlo off his list with valuable experience gained. We can’t rest on our laurels because there is much still to do. We will run three New Generation cars in Sweden and we are determined to continue improving. For now, though, we’ll savour a hard-fought and well-earned podium.”