The Hyundai Shell World Rally Team has made a solid start on the opening day of this weekends Rally Finland with heavy rain making conditions tough for drivers. 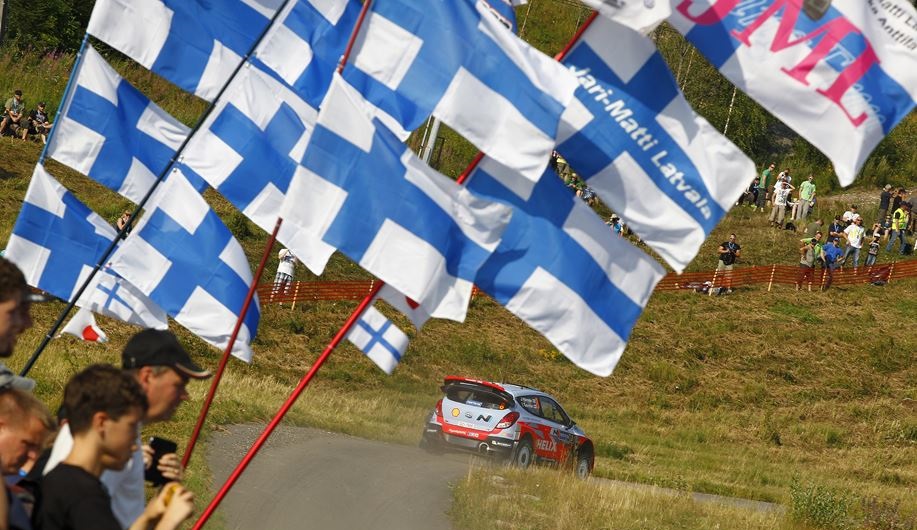 All three Hyundai i20 WRC cars have ended Thursday’s four stages in the top ten overall with local hero Juho Hänninen in fifth place after a strong start to his home rally.

July 31, 2014  The Hyundai Shell World Rally Team have completed the opening four stages of this weekend’s gruelling Rally Finland with all three of its Hyundai i20 WRC cars safely in the top ten after a tough start to the eighth round of this year’s FIA World Rally Championship (WRC).

Torrential rain and stormy weather made for treacherous conditions at times, adding further to the existing challenge of Rally Finland, the fastest round of the WRC. Nonetheless, the trio of Hyundai Shell World Rally drivers made good headway during the afternoon to end the first day in a highly satisfactory manner.

Thierry Neuville (#7 Hyundai i20 WRC, co-driver Nicolas Gilsoul) wasn’t comfortable with his pace notes early on and lacked some confidence in the conditions but still brought his car safely to the end of the first day with two full days of tough stages coming up.

Neuville said: “The conditions were far from ideal today but we find some positives from completing the first day without too many issues. I was a bit too slow in the opening stages and felt that my pace notes were not up to speed, but we have made improvements during the afternoon. We lacked some confidence early on and in the repeat of the Lankamaa stage I felt that the car was bottoming a bit with some steering difficulties in the conditions. It was much better than the first stage this morning but we have to look at what we work on for tomorrow, which will be a long day full of tough stages.”

Home hero Juho Hänninen together with his fellow Finn co-driver Tomi Tuominen (#8 Hyundai i20 WRC) started off in competitive fashion finishing fourth in SS1 (Lankamaa 23.47km) and third in SS2 (Jouhtikylä), tackling the tough conditions in style. The crew’s performance helped them to end Thursday in fifth overall.

Hänninen said: “It is very special to be back competing in Finland and to have so much support for Tomi and myself. We had a reasonable start in SS1 and SS2, focussing on keeping our driving consistent and finding a rhythm in the tough conditions. The repeat of Lankamaa wasn’t as good and we encountered some very deep ruts which caught us out a few times. We lost a bit of confidence as a result of that, which was slightly disappointing but overall it’s been a decent start and there’s still a long way to go. This evening’s stage was definitely a nice way to end the first day in front of the spectators!”

Hayden Paddon and his co-driver John Kennard (#20 Hyundai i20 WRC) are taking part in their third consecutive rally with the Hyundai Shell World Rally Team this weekend and the crew are no strangers to Finnish competition. They put their experience to good use during today’s four stages to claim a top ten position overall despite facing some of the worst of the wet weather.

Paddon said: “In the first stage, we had about five or six kilometres of heavy rain, which meant we were hardly able to see the road. Our focus was on making it to the end of the stage, rather than pushing for times. The second stage was much better and we found further improvements on the repeat of Lankamaa. Our benchmark has to be Thierry and Juho and we weren’t far off their pace in SS3 so it wasn’t too bad. The rain had eased so we were able to find more consistency even if there were some pretty big ruts too. It’s been a pretty solid opening day for us but there’s more to come tomorrow.”

The Hyundai Shell World Rally Team has used one of its technical development ‘jokers’ for this event with some upgrades to the #7 and #8 cars. After only four stages of this 23-stage Rally Finland, it is still early days for any conclusions to be drawn.

Team Principal Michel Nandan said: “We have to recognise that this event is one of the biggest challenges we will face this season with some of the fastest stages and  from what we’ve seen today  some tough conditions. It is therefore imperative that we focus on getting all three cars through each day safely. All three crews have achieved a solid start to the rally but hopefully we will be able to enjoy some better weather tomorrow so we can push more and understand the performance of our Hyundai i20 WRC car in the very unique stages of Rally Finland. We have three cars in the top ten but the next few days will really dictate the outcome of this exciting rally.”