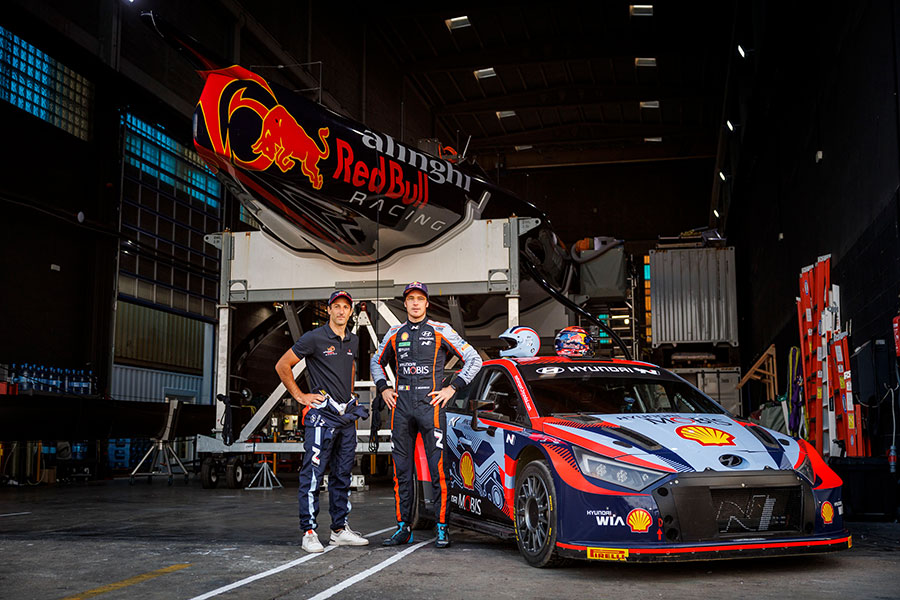 Thierry and Dani have swapped the rapid roads of WRC for a wild ride on the sea as they met up with America’s Cup hopeful Arnaud Psarofaghis.

Ahead of the penultimate round of the 2022 season for our pair, the Swiss helmsman took them on an exhilarating trip around the Barcelona coast aboard Alinghi Red Bull Racing’s towering AC75 training vessel. Known as BoatZero, the 75-foot monohull enables its all-Swiss crew to gain valuable experience while their race boat for 2024 is being completed.

For our two drivers, who are most accustomed to high-speed pursuits on four wheels, the sailing excursion offered a unique adrenaline rush.

High-speed on land and sea

Before voyaging out to sea, it was Arnaud who was taken out of his comfort zone. He occupied the passenger seat of our i20 N Rally1 alongside Thierry, who showed off the pace of the hybrid-powered challenger along the scenic Catalonian roads during the team’s pre-event test.

As Barcelona’s Port Vell is the location of much of Arnaud’s training with the Alinghi Red Bull Racing team, it was a fitting landscape – and seascape – to cross-over and contrast the two fascinating examples of modern sporting technology.

“That was a fun new experience,” said Thierry. “It was my pleasure to have Arnaud with me in the i20 N Rally1 and then to discover Alinghi Red Bull Racing. It was a once in a lifetime experience: the whole infrastructure, the team, the precision, the technology they use, it’s impressive. I didn’t expect that much speed and performance, but it was great, especially when the boat starts to lift. There are lots of similarities between our teams. They have a lot of engineers and mechanics like we have, as well as the latest technology, everyone pushing to the limit; that’s what you need to fight at the front of competition.”

“The conditions were incredibly difficult, but you could really get a feel for how everyone comes together to operate the boat,” said Dani. “It was a proper experience. In some ways there are some comparisons to how we run our rally team. Of course, there are only two of us in the car, but when we come back to service, there’s a team of mechanics and engineers all working together; this teamwork is just the same as on the boat. We may not have had the best weather conditions, but I felt great and there was a huge amount of water coming in which really added to the feeling – it was on another level. After experiencing this, I definitely want to come and see the America’s Cup in action.”

“I had the great experience to be on board with Thierry,” commented Arnaud. “At first, we took it slowly, and then he was pushing, pushing…so it was a really great moment. It’s brutal in one way, but his driving is really smooth, so it’s kind of two different feelings at the same time. This experience was the best thing I’ve done in my life so far. Sailing and the race car are two different worlds, but they have similarities – they’re technical, they need to be done with feeling. There’s also great communication between the mechanics, between the engineers, and as well with the boat designer and the boat builder. It’s the place where our worlds meet.”