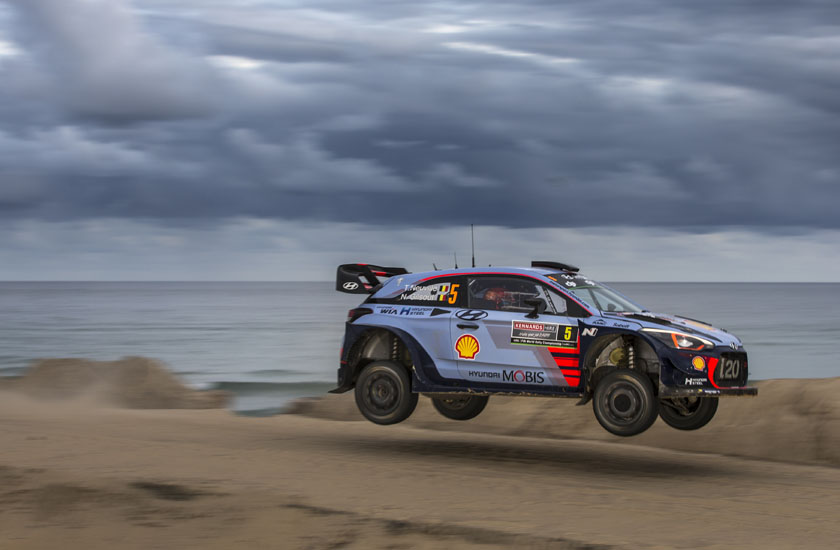 We have taken another step closer to securing our first-ever Rally Australia victory with our Belgian pairing of Thierry and Nicolas now leading the event.

At the end of the penultimate day of the 2017 season, our #5 crew had established a 20.1-second lead, having claimed four more stage wins.

The duo took over the rally lead from their team-mates Andreas and Anders, who were forced to retire after picking up a double puncture in the morning loop.

“It’s a good feeling,” said Thierry. “I have been very pleased with our approach to today’s tricky stages. At the same time, there is a sense of disappointment that we weren’t able to have more of a fight with Andreas.”

Fall at your feet

A dramatic Saturday, with uncharacteristically inclement weather conditions, began with the daunting 48.89km Nambucca stage and 20.87km Newry test. It was on this stage where our Norwegian crew ran into trouble.

“About 2km after the start, on a right-hander over a crest, I went wide and touched the bank quite hard,” recalled Andreas. “I thought I had only a rear puncture but it became quickly apparent that we had one at the front too. With only one spare in the car, it was game over. Nine times out of ten we would have been OK, but luck was not on our side today.”

Nambucca was split into two separate tests for the afternoon  Welshs Creek and Argents Hill. The repeat of Newry17 was cancelled, leaving just two runs through the Destination NSW Super Special. Hayden and Seb made progress throughout the loop, completing the day in fifth overall.

“The Australian weather has thrown us a real curveball this year,” explained Hayden. “Some stages were like two totally different rallies with some parts wet and others completely dry. We found some improvements, which helped give more confidence and made the driving more natural.”

The final day of Rally Australia covers 64km of competitive action across five stages. The 9.93km Pilbara Reverse and 6.44km Wedding Bells stages are each run twice, the latter as the rally-concluding Power Stage. In addition, crews will negotiate the 31.90km Bucca16 stage, which remains unchanged from last season.

“It is fantastic to be leading rally after another competitive day,” summarised our Team Principal Michel. “We are hopeful that we can end the year with victory but, as we have been reminded, there are often surprises in store in Australia.”

Thierry was equally pragmatic about his chances: “There is no such thing as a comfortable lead,” he said. “With the weather still looking like it could play a part, we will have a challenge on our hands on the final morning.