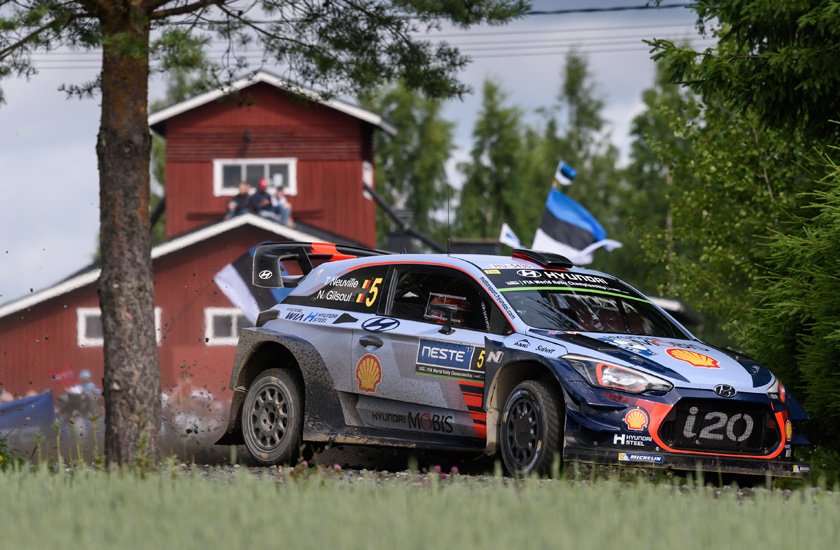 At the end of a disappointing Rally Finland, we can take some comfort from seeing Thierry’s name top of the Drivers’ Championship.

By securing 11 points in total, Thierry has moved onto 160 for the season, the same as Sébastien Ogier, who did not score in Finland. However, Thierry holds the top spot as a result of his three victories this season, compared to the Frenchman’s two.

“We set out to score more points than Ogier this weekend, and we were able to achieve that,” said Thierry. “We had a very difficult weekend so to salvage some points is important. This levels the playing field.”

It has been an uncharacteristically low-key weekend for our team, with all three of our crews struggling for confidence. Dani and Marc finished in ninth place, but are already looking to bounce back at the next round on tarmac.

“I am relieved that this rally is over,” admitted Dani. “On these fast roads you need to be fully committed to perform at the highest level. We cannot let this weekend affect us; we need to stay concentrated and push flat out for victory in Germany!”

Hayden and Seb had little cause for celebration. A trio of top-six stage times on Sunday morning offered a glimpse of what might have been.

“This rally has perfectly illustrated our season, where anything that can go wrong does go wrong. I am sure we could have fought for the podium this weekend, and that is the positive that we will take away.”

Rally Finland has never been a strong event for our team, and 2017 has continued that trend.

“We expected this rally to be more difficult than others but we never thought we would be missing so much pace,” said our Team Principal Michel. “We are disappointed that could not reach our pre-rally objective to reach the podium. We can now focus on the next two events, which should be better suited to the i20 Coupe WRC.”

He added: “We send our congratulations to Esapekka Lappi for his debut WRC victory, and to everyone at Toyota Gazoo Racing for a great home result.”

There are 34 points separating Hyundai Motorsport from Manufacturers’ Championship leaders M-Sport, with four rounds of the season left to contest.

Next on the calendar is our home event, Rallye Deutschland, the first tarmac event since Tour de Corse, which will take place from 17-20 August.

“We know everyone is pushing hard to keep us in contention,” said new joint-Championship leader Thierry. “We know from the past that we can perform well in Germany.”

2017 FIA World Rally Championship for Drivers’ Standings
After round 9

2017 FIA World Rally Championship for Manufacturers’ Standings
After round 9