Our second win of 2016 with the New Generation i20 WRC 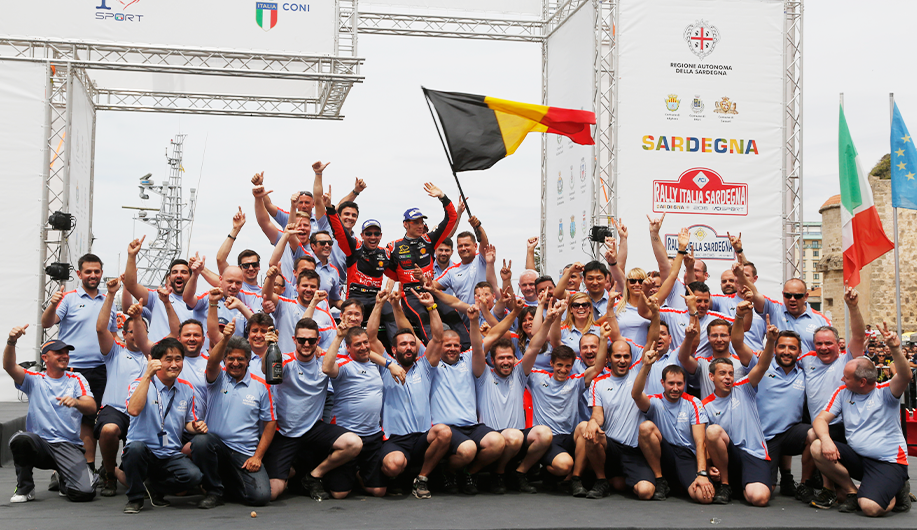 Our second win of 2016 with the New Generation i20 WRC

A fantastic performance for our Belgian crew puts us back on top.

We’ve done it again! After 19 stages and 323km, Thierry and Nicolas have secured victory in Rally Italy Sardinia.

The fantastic result marks the second win  for our New Generation i20 WRC this season after Rally Argentina in April. It’s the third WRC win for our team in total, and Thierry’s first since Rally Germany in 2014.

We wanted to recover quickly after a disappointing result in Portugal but we didn’t expect to do it in such style. Thierry has put in the performance of his career with nine stage wins and a dominant rally overall. He took charge of the rally from SS7 (Tula 2) on Friday, and kept hold of the lead right until the very end.

Thierry explained just why this win is so special.

“We’ve had some tough times, like in Portugal, but we’ve stuck together and our hard work has really paid off. Hopefully we can use this result as a springboard for the rest of the season; it is certainly good for the confidence.”

He was quick to acknowledge the support from everyone at our Alzenau factory.

“Thank you so much to my fantastic team,” he tweeted to his 52k followers, “it’s a team victory!” We couldn’t agree more and it’s a victory we share with all our fans too.”

Our Team Principal Michel Nandan was also full of praise for our Belgian stars.

“Thierry and Nicolas thoroughly deserved this victory. It is a result that will give the whole team a real lift. This result shows what can happen with hard work and determination.”

Dani and Marc also finished Rally Sardinia strongly  taking their fourth consecutive fourth-place finish. That’s impressive consistency and, as a result, Dani has now moved up to second in the Drivers’ Championship behind Sébastien Ogier.

“We knew this rally would be one of those that required a steady approach,” commented Dani.  “It was not always easy and some stages were quite tricky, narrow and slippery, which doesn’t really suit my style as much as other rallies. On Sunday’s final stages, we just wanted to keep out of trouble and not make any mistakes. I think we got all we could out of the car and ourselves.”

Our young talents Kevin and Seb were also on fine form on Sunday morning. After taking their first ever stage win on Saturday, the Dutch-British duo showed just how quickly they are adapting to WRC life with an eye-catching run to second in the Power Stage.

“We wanted to give a bit of a push in the Power Stage,” said Kevin. “We’ve been building our confidence in the car over the course of the weekend. We’ve worked hard to find a rhythm and I really enjoyed the final stage.”

Portugal and Sardinia have been the first two of Kevin’s scheduled WRC events this season. He is confident that these two events have helped him find a good direction.

“I think we have a nice set-up for the future. I look forward to returning to the WRC stages later this season,”he said.

Two out of Three

Sardinia has been one of our best weekend performances to date. A total of ten stage wins (nine for Thierry, one for Kevin), and a second win for our New Generation i20 WRC in only its sixth outing.

“We’ve now taken two wins in the last three rallies and bounced back from Portugal,” concludes Michel. “It’s exactly what we set out to achieve. We still have work to do, but we’re keener than ever before to continue our strongest ever season in WRC. Poland will offer a new set of challenges, but we’ll be prepared. For now, though, we’ll enjoy this victory as a team.”