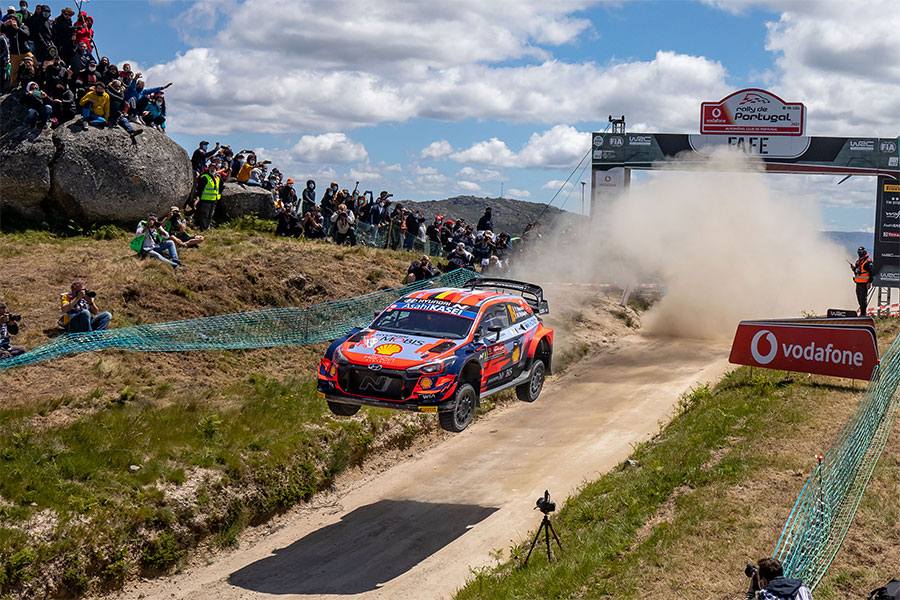 As the 2022 WRC season continues, we travel to Rally de Portugal with increased confidence following our strong double podium finish at the previous round. After a difficult start to the campaign, our entire team is focused on continuing our improved form and competing for victory.

“We go to Portugal with a positive feeling after our best performance of the season so far in Croatia,” said Julien, our Deputy Team Principal. “While it is a new surface for the i20 N Rally1, we want to keep this forward momentum and once again compete at the front of the field.”

Getting to grips
As the first gravel event of the hybrid era in WRC, Rally de Portugal will be a demanding test for our i20 N Rally1. While it has already tackled ice, snow and tarmac so far this season, the abrasive and unpredictable surface presents a fresh challenge that will push our car and crews to the limit.

“The stages are enjoyable yet challenging,” commented Thierry. “This is mainly due to the high temperatures, so tyre wear is important here as well, and it can be quite rough on the second pass of the stage.”

With over 330km of special stages, Rally de Portugal is known to be one of the more gruelling events on the calendar. It is also contains one of the most iconic landmarks in rally history – the iconic Fafe jump – which is sure to produce some spectacular moments.

Ready to go
The event will mark Dani and Cándido’s first competitive outing in our i20 N Rally, however the crew has accumulated plenty of kilometres in the car during testing. Dani also boasts a strong record in Portugal, having stood on the podium at the event on five occasions.

“I’m excited to drive the car on gravel for the first time,” said Dani. “I’m hoping to have a good rhythm with the car and adapt myself quickly to this new challenge. Portugal is always really nice, so I am very happy that this will be my first event of the season”

The Spaniards will join Thierry/Martijn and Ott/Martin in our line-up for the weekend, with the Belgian and Estonian crews coming off a podium finish at Croatia Rally.

“Martin and I know what it takes to win in Portugal,” said Ott. “We hope that the momentum from our podium last time out in Croatia will continue with a good result next weekend.”

WRC2 return
Rally de Portugal will also mark our first appearance of the season in the WRC2 class. Two of our i20 N Rally2 cars will be taking on the tough gravel stages at the hands of Teemu/Mikko and Fabrizio/Carlos.

“We wish both crews the best of luck and look forward to seeing what they can do next weekend,” added Julien.

Rally de Portugal will take place on May 19-22.