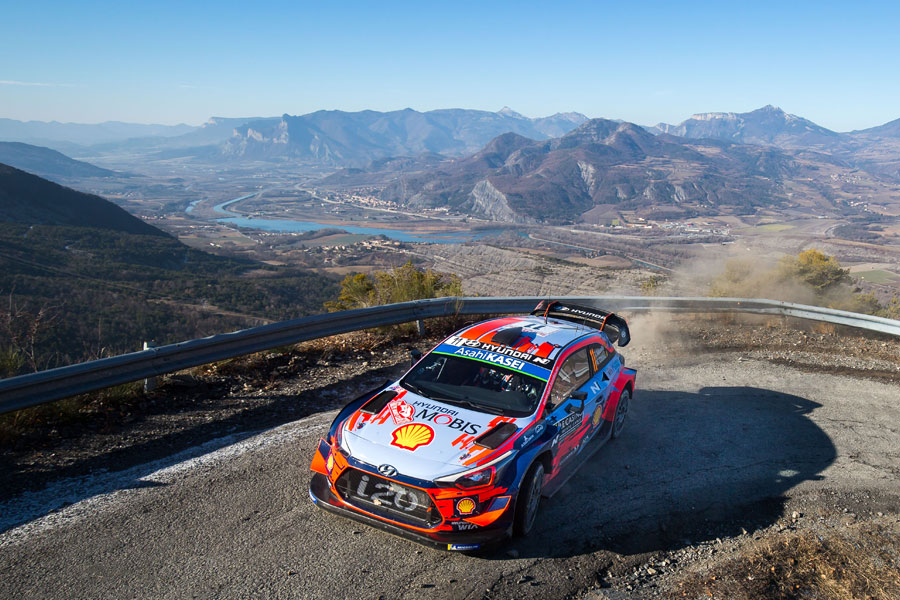 We are aiming to start our defence of the WRC manufacturers’ title in style as Rally Monte-Carlo gets the 2020 season underway.

‘Monte’ will offer a unique challenge for our three crews with stages held at varying altitudes, in unpredictable weather conditions and with some captivating night stages. Any combination of snow, ice and dry/wet tarmac are possible, making tyre choice and concentration levels critical to success.

After a title-winning 2019 season, we are determined to go one better this coming year. “We have made no secret of our ambitions to win both the manufacturers’ and drivers’ championships in 2020,” said our Team Principal Andrea. “Our focus will be on maximising the reliability and performance of the car to fight at the front at every event.”

Our three crews – Thierry/Nicolas, Ott/Martin and Sébastien/Daniel – are well versed in the complexities of Monte-Carlo. In 2019, our Belgian crew scored our best-ever result in the Principality to date, finishing just 2.2-seconds from the rally winner.

“Rallye Monte-Carlo kicks off the season and we are straight into the dark stages,” said Thierry. “It’s a very tough event, and tyre choice is crucial. There’s a lot of hesitation and you need good pace notes, as well as accurate information from your weather crew.”

Newcomers to our team, Estonians Ott and Martin, have three consecutive podiums in Monte. “The start of a new year begins with probably the most demanding event of the season,” said Ott. “To make it even more challenging, we have a new team and a new car to learn while tackling the tricky conditions.”

Seven-time Monte winners Sébastien and Daniel were in contention for third place with the i20 Coupe WRC in 2019. “You need to find the right rhythm to be fast without taking major risks,” said Sébastien. “This rally you need to approach with your head; it’s not just flat out, it’s a question of reflection.”

The opening event of the season will also see our i20 R5 ’20 in action with our two WRC 2 crews, run by RedGrey Team. Norwegian-Swedish crew Ole Christian/Jonas and Russians Nikolay/Yaroslav are already proven entities in the WRC 2 category and are tasked with powering the i20 R5 ’20 to new heights.

“It will be the first time we have run the car in a competitive scenario,” said Ole Christian. “We are confident we can utilise our existing experience of the R5 category to bring home a good result.”

Nikolay added: “After weeks and months of preparation, we are raring to go for Rallye Monte-Carlo. It will be no easy task, but we have done everything we can to ensure we are ready for the challenge ahead.”

Action at Rallye Monte-Carlo begins on Thursday with an opening ceremony in Monaco followed by two night-time stages. Friday is the longest day, with two loops of three stages totalling over 125km. Saturday moves to the north- and south-east of the Gap Service Park, with two stages run twice each, before crews return to Monaco for the final four stages on Sunday.