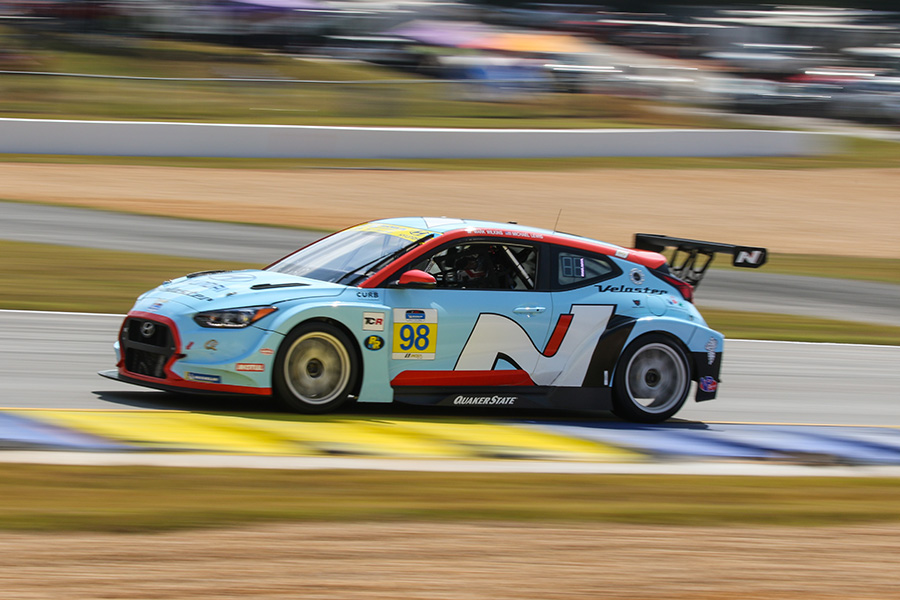 There was stateside success for our Veloster N TCR with 1-2 title triumph in the teams’ and drivers’ championships in the TCR class of the IMSA Michelin Pilot Challenge.

Supported by Hyundai America, the Bryan Herta Autosport team claimed the titles following a competitive ten-round campaign with their two cars. The drivers’ honour was clinched in the final race at Road Atlanta, where Mark Wilkins and Michael Lewis took victory.

Our Customer Racing Senior Sales Associate Andrew Johns said: “This season the Bryan Herta Autosport team has been superb, and their performance has rightly been rewarded with first and second in both the drivers’ and teams’ titles. The work of the team and the pace of the car and drivers have combined to win the championship.”

The duo, who drove i30 N TCR in last year’s Pirelli World Challenge, started the season relatively slowly at the showpiece events of Daytona and Sebring as they got to grips with their new machine. However, they started the central part of the season with victory in a thrilling race at Mid-Ohio. They followed it up with a second place in another dramatic finish at Watkins Glen, before adding another win at Lime Rock Park as Veloster N TCR finished first and third.

The podium visit began a string of three top-three finishes for Mason Filippi and Harry Gottsacker in the sister entry. The ‘junior’ pairing in the team scooped a first win in the series at Road America and second at Virginia International Raceway – putting Hyundai teams first and second in the championship before the penultimate race at Laguna Seca. Fourth place in the season finale confirmed second in the standings, completing an amazing debut season in IMSA competition for Bryan Herta Autosport and Hyundai.

Developed with the primary aim of competing in the USA – where the i30 N is not sold as a road car – the Veloster N TCR shares around 85% of its parts with the i30 N TCR and is built at our headquarters in Alzenau. The endurance races of the IMSA Michelin Pilot Challenge also see the cars run with an ABS system and additional fittings to enable quick refueling in the pitlane.

Andrew added: “Bringing a second TCR design to market for 2019 in the Veloster N TCR was very ambitious, but also hugely important. Our key target is to promote the roadgoing versions of the N models. Having the Veloster N TCR racing in the Michelin Pilot Challenge was one of the core aims of the project.”