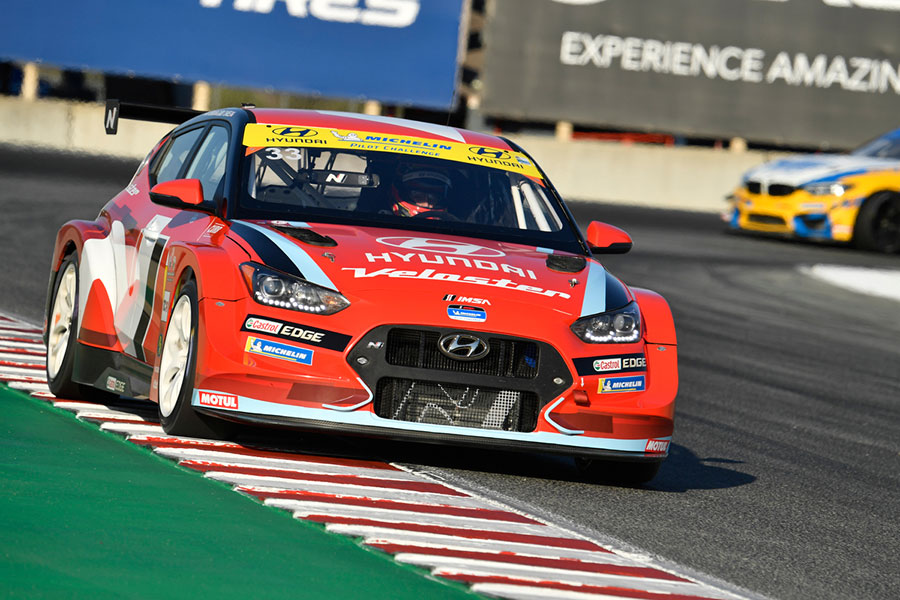 As a result of our customers securing a clean sweep of titles in the IMSA Michelin Pilot Challenge, we are celebrating our first manufacturers’ honour with the Veloster N TCR.

The Bryan Herta Autosport team finished first, second, and third in both the drivers’ and teams’ standings. In only their first season of racing with our car, Gabby Chaves and Ryan Norman clinched the drivers’ title with their #33 Veloster N TCR.

Customer Racing Operations Leader Andrew said: “This has been a very successful campaign for Bryan Herta Autosport and the Veloster N TCR in the IMSA Michelin Pilot Challenge. After taking two titles in their first year with the car, the team – in partnership with Hyundai USA – increased their commitment and was richly rewarded with all three championships.”

Best in class
In an incredible show of dominance, the Veloster N TCR won seven of the ten races held in the 2020 season. Chaves and Norman were victorious on three occasions, with their win at the penultimate round in Laguna Seca giving them a points’ lead for the finale. Gottsacker and Wilkins and Mason Filippi and Michael Lewis scored two wins each.

The team also enjoyed six 1-2 finishes during the season, with a succession of double podiums in July and August establishing the Veloster N TCR as the car to beat.

Increased presence
Having won both the drivers’ and teams’ titles in 2019, Bryan Herta Autosport increased its commitment as our customer in the series. It expanded to run three Veloster N TCR cars for the opening round in Daytona, then added a fourth with Spencer Brockman and Peter Chase at the wheel. A consistent season with this strong line-up helped the team to secure the manufacturers’ title for Hyundai before the final event of the year.

The proven performance of the Veloster N TCR has seen the number of our customer cars in the series grow. The Forty7 Motorsports team finished third in the first visit to Sebring, while Copeland Motorsports took second place at Road Atlanta. The final race of the year also marked the debut of Van Der Steur Racing with the Veloster N TCR.

“More Veloster N TCR teams are joining the series and taking very strong results thanks to the performance of the car, and the support available to them,” commented Andrew.